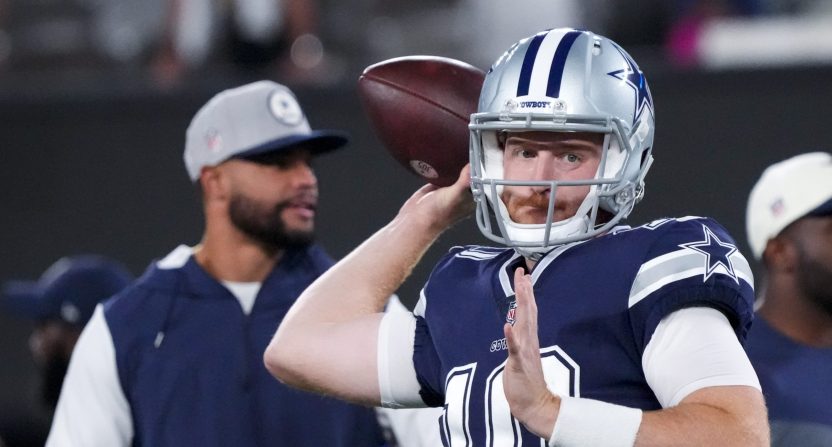 In Week 1, the Dallas Cowboys lost to the Tampa Bay Buccaneers. Their offense looked completely out of sorts and when quarterback Dak Prescott got hurt towards the end of that game, optimism wasn’t exactly a prevalent feeling around the Cowboys. Two weeks later, things have changed — and a lot of that is due to the play of quarterback Cooper Rush.

Dallas defeated the New York Giants on Monday night. Rush had a solid performance, going 21-for-31 for 215 yards with one touchdown pass. And those numbers would look better if not for critical drops from both CeeDee Lamb and Jalen Tolbert (though Lamb also helped Rush with a spectacular touchdown grab).

In Week’s win over the Cincinnati Bengals, Rush was 19-for-31 for 235 yards with a touchdown and no interceptions. He was also essentially flawless in leading Dallas to the game-winning field goal.

Most importantly — at least from his team’s perspective — Rush is 2-0 as a starting quarterback this season and 3-0 overall. The NFL world has definitely taken notice of the undrafted sixth-year quarterback.

Here’s the entire list of undrafted QBs who’ve won the 1st 3 starts whle throwing for at least 190 yards in each of them:

All I know is this: I'm certainly not saying Cooper Rush is better than Dak Prescott … BUT HE HAS PLAYED BETTER IN HIS THREE STARTS, TWO ON THE ROAD, THAN DAK HAS AGAINST GOOD TEAMS OVER HIS LAST 12 GAMES.

Cooper Rush has kept the boat afloat without Dak, no matter what happens next.

Shortly after the Cowboys defeated the Bengals in Week 2, Dallas owner Jerry Jones commented that he’d be more than happy with a quarterback controversy. We’re probably not quite there yet, much like we weren’t there after only two games in 2016, when Prescott was filling in for an injured Tony Romo. But if he continues to play well while Prescott recovers from his injury, we may be steering towards that direction.

Shortly before the 2022 season began, the Cowboys moved Rush up from the practice squad to the active roster. At the time, it didn’t feel like a terribly significant move, given Prescott’s hold on the job. Now, that decision seems to have helped Dallas salvage a season that looked to be in bad shape after only one game. Whether Rush plays well enough to trigger a real quarterback controversy remains to be seen. But so far, he’s played well enough to keep the Cowboys afloat — and then some.