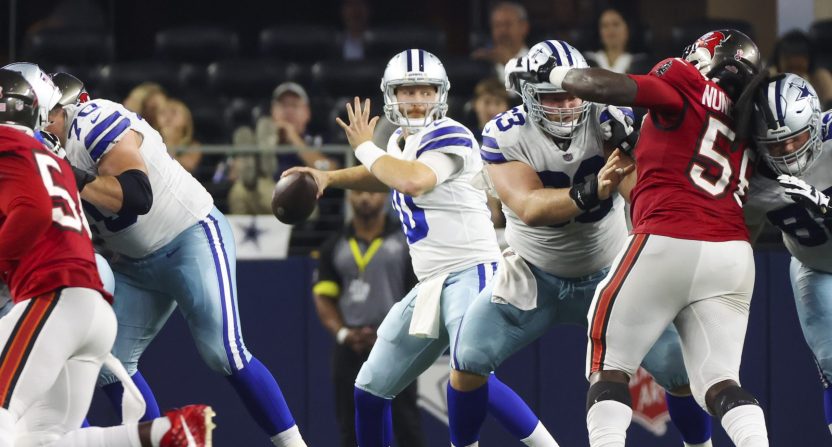 The Dallas Cowboys are going to have to go without quarterback Dak Prescott for the foreseeable future after he injured his thumb and will need surgery before returning to the field. The team now turns to Cooper Rush to hold down the fort until he returns.

Rush was elevated to the active roster before Week 1 after a brief stint on the practice squad. Given that the Cowboys did not have any other quarterbacks on the roster, it felt like a no-brainer. Now, it’s a decision that will impact how the first half of their season plays out.

Following Dallas’s season-opening loss to the Tampa Bay Buccaneers, Rush spoke with reporters about Prescott and how he plans to fill those shoes.

“Just go do your job,” Rush said. “Just execute. It’s the same plays, it’s the same other guys, we’ve still got everyone else. I trust in those guys, they trust in me, just all come together as a group and make plays and execute.”

The 28-year-old has been with the team since 2017, knows the system well, and has handled himself like a veteran when he’s been needed. This is exactly the situation that he’s there to handle.

While he might be replacing him temporarily, Rush knows he can’t replace what Prescott means to the Cowboys.

“He’s the heart and soul of the team. He’s our leader. He’ll grind through this like he always does and he’ll be back,” Rush said.

The Cowboys are 0-1 to start the season and will have to turn things around in a hurry if they want to be in the playoff chase by the time Prescott returns in 6-8 weeks.