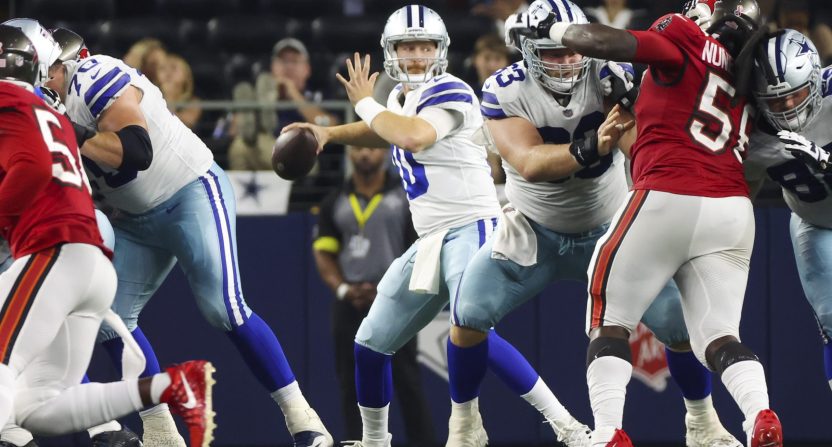 When the Dallas Cowboys announced that they had lost quarterback Dak Prescott for 6-8 weeks due to a thumb injury, many thought that their season could be over. However, owner Jerry Jones had confidence in backup Cooper Rush and it sounds like his teammates do too.

Rush did step in for Prescott last year when he was injured before the Minnesota Vikings game and says he is ready to step up and do what he can to help this team get back on track after their season-opening loss to Tampa Bay.

“We have a bad taste in our mouth after losing a game,” Rush said. “You can’t wait to get back out there the next week. We were 0-1 last year too, though. This is the first step.”

Rush played well against the Vikings last year, throwing for 325 yards and two touchdowns and leading the Cowboys down the field on a winning drive. But last year, the Cowboys had more offensive weapons. If the Cowboys are to going to get back on track, his teammates will have to step up, and Rush has to earn their respect. He feels like he has it.

“I think it’s more about the teammates. All you do every day is want to earn their respect,” Rush said. “To go out there on Sunday, that’s the best way to do it. Go play well. They have my respect. I think they respect me. I think we’ve got a good group. I think we’re ready to roll.”

Cowboys QB Cooper Rush: “When you’re out there on the field, I do feel in command and in charge. I think those guys, it goes back to knowing your stuff, they know that I know it. And when you know your stuff, you can go out there and lead and command and guys will respect it.”

The Cowboys are hoping to get back on track this weekend against the defending AFC Champ Cincinnati Bengals.