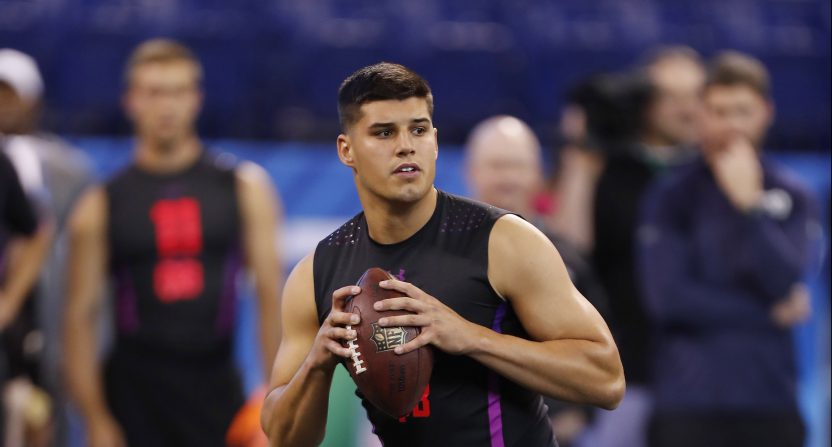 Derek Carr was nearly the league MVP in 2016. Kirk Cousins is now the highest-paid player in the NFL. Super Bowl champion Russell Wilson has made more Pro Bowls than any other quarterback drafted this decade. Nick Foles, who holds the third-highest single-season passer rating in NFL history, is the reigning Super Bowl MVP.

Dak Prescott put together one of the best rookie seasons in NFL history in 2016. Andy Dalton has had a successful seven-year run as a starter in Cincinnati. Tyrod Taylor just led the Bills to the playoffs and has a Pro Bowl on his resume. Jimmy Garoppolo has already shown enough to earn himself a $137.5 million contract in San Francisco.

What do Carr, Cousins, Wilson, Foles, Prescott, Dalton, Taylor and Garoppolo have in common? None were first-round picks, and all were drafted this decade. In fact, only three (Carr, Dalton and Garoppolo) were second-round selections. Arguably the most accomplished of the batch (Cousins, Wilson, Prescott and Foles) were either third- or fourth-rounders, while Taylor wasn’t selected until Round 6.

Sure, Tom Brady, Drew Brees and Tony Romo weren’t first-round picks in the previous decade. But mid-round quarterbacks have definitely experienced a particularly noticeable spike in their success rates in recent years.

Close to 40 percent of the league’s 32 projected starting quarterbacks for 2018 weren’t first-round picks, so there’s a decent chance a mid-round signal-caller will again emerge from this draft.

So naturally, all mid-round eyes are on Rudolph. And for good reason, because the Oklahoma State product could have easily been a first-round pick under different circumstances.

A three-year starter in the Big 12, Rudolph completed 63.2 percent of his passes while averaging 9.4 yards per attempt with the Cowboys, with those rate-based numbers growing to 65.0 and 10.0 in his senior season. The team went 30-9 during his three seasons under center, winning two bowl games after making the 2015 Sugar Bowl but falling to Ole Miss.

Rudolph doesn’t have a huge arm and utterly lacks mobility in the pocket, and he put up those big numbers as part of a spread offense while feasting on some rather weak competition, but he still has the size (6-5, 235 pounds), experience and statistics (a 65-to-13 touchdown-to-interception ratio during his last two years in college) that you want in a potential franchise quarterback. He showed during the pre-draft process that he can make every throw, and he’s a top-notch decision-maker who rarely makes big mistakes.

That might not be enough for the soon-to-be 23-year-old to make an impact as a rookie, especially while backing up Ben Roethlisberger for the competitive and notoriously conservative Pittsburgh Steelers. And it doesn’t help that Big Ben says he wants to play another 3-5 years. But there’s no guarantee that’ll happen and the 36-year-old will stay healthy and avoid running out of gas.

But even if Rudolph doesn’t gain an extended audition in Pittsburgh, a few promising showings within a small sample could be enough for him to land a big opportunity elsewhere, as we saw with Garoppolo in New England.

He certainly has the tools, and he’ll have a lot of opportunities to grow without being baptized by fire in Pittsburgh. At the very least, he’ll be a mid-round quarterback to watch for several years to come.

2 thoughts on “Could Mason Rudolph be the NFL’s next mid-round quarterback success story?”