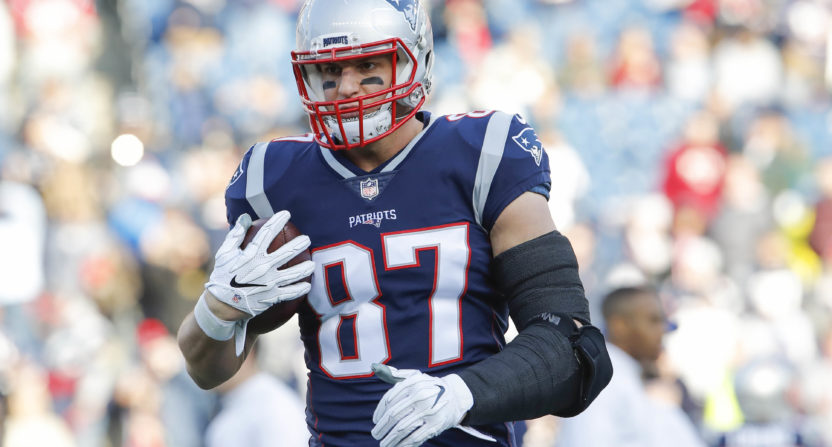 An interesting report emerged from Greg Bedard of the Boston Sports Journal on Thursday night about the growing possibility of the New England Patriots trading Rob Gronkowski. The star tight end hasn’t yet committed to playing football in 2018, and there’s been speculation he could enter the WWE (he’s reportedly been recruited) and/or pursue a career in Hollywood (and is indeed set to be in an upcoming movie).

According to Bedard’s “Bill Belichick-friendly” source, “The longer Gronkowski goes without saying he’s all in, the chances of him being traded increases” (h/t: Larry Brown Sports):

A Bill Belichick-friendly source agreed with my thinking that once a player makes Belichick start to contemplate life without him, Belichick starts to warm to being without that player. “He imagines you gone,” he said. The longer Gronkowski goes without saying he’s all in, the chances of him being traded increases, the source said.

Sources from two teams that would make sense for Gronkowski said they absolutely would be interested if Belichick called. “He’d be perfect for us,” one said.

Bedard adds that the trade cost would likely be a “late first-round pick if the team has it, but more likely a high second-rounder and a third.”

We know Bill Belichick believes he can win with just about any kind of players and frequently prioritizes system fit over talent. However, Rob Gronkowski is a special case. He’s a monster and game-changing talent. The Patriots would surely target the tight end position in the draft if they intend to deal Gronkowski, and I’m sure they would be able to get quality production out of the system with whoever they put at the position. But they’re not going to get Rob Gronkowski talent and game impact (and impact on the opponent’s film-watching and game-planning for a full week).

So, unless Gronkowski is becoming that big of a headache to the Patriots, it’s hard to justify actually pulling the trigger on a trade here. We’re still several months away from the season, and even if his indecisiveness and whatnot drag into training camp, oh well. You put ego aside and wait on a special talent like this. Gronk could not practice for months and still go out there on gameday and be a nightmare in the red zone for any defense to deal with.

And if Gronkowski indeed becomes available, every single other team should be interested in acquiring him, especially if the cost is “only” what Bedard suggested. Gronkowski has two years remaining on his contract, and two years of what he brings to the table is absolutely worth the suggested cost, particularly for a Super Bowl contender. Former Patriots quarterback Jimmy Garoppolo and the San Francisco 49ers would make a perfect match here.