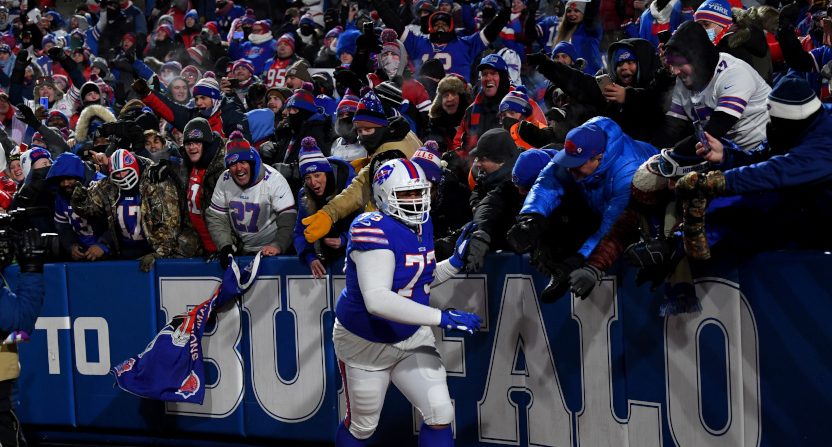 There have been several cases of alleged fake vaccine card usage from athletes, from the NFL to the NHL to the CFL. But while those have led to punishment from leagues, they haven’t led to criminal charges. A pair of fans who attended the Buffalo Bills’ home playoff win over the New England Patriots at Highmark Stadium on Jan. 15 (a general stadium shot during that game is seen above)  are now facing felony charges for allegedly using fake vaccine cards, though. Here’s more on that from Nick Veronica and Chris Horvatits at Buffalo CBS affiliate WIVB:

Michael and Amber Naab, 34 and 37, were arraigned Tuesday night in Orchard Park Town Court and charged with one count each of Criminal Possession of a Forged Instrument in the Second Degree, a Class D felony.

…The Naabs gained entrance to the Jan. 15 game with their fake cards, the district attorney said. But they were already on the Bills’ radar due to their social media activity, [Erie County DA John] Flynn added, and an anonymous tip led to an investigation during the Patriots game. They were identified and removed from their seats for questioning during the third quarter.

Without their social media posts, Flynn said the couple “probably” would have gotten away with using fake cards.

Well, that’s a good reminder to never tweet (or post), at least not about the crimes you’re committing. And this is a crime in New York, especially under the Truth in Vaccination legislation Gov. Kathy Hochul signed into law in December, but Flynn said there would have been enough to charge the Naabs under the previous law too. Flynn said he is not going to seek a jail term for the Naabs, though:

The charges carry a maximum of 7 years in prison if convicted, but Flynn said in a press conference Wednesday that prison would “absolutely not” be on the table if the two are convicted.

So while it may not be the crime of the century, it is something that seems likely to lead to some consequences for these people. And with a lot of sports stadiums and arenas across the U.S. and Canada now having vaccine mandates, we’ll see if there wind up being other cases like this.