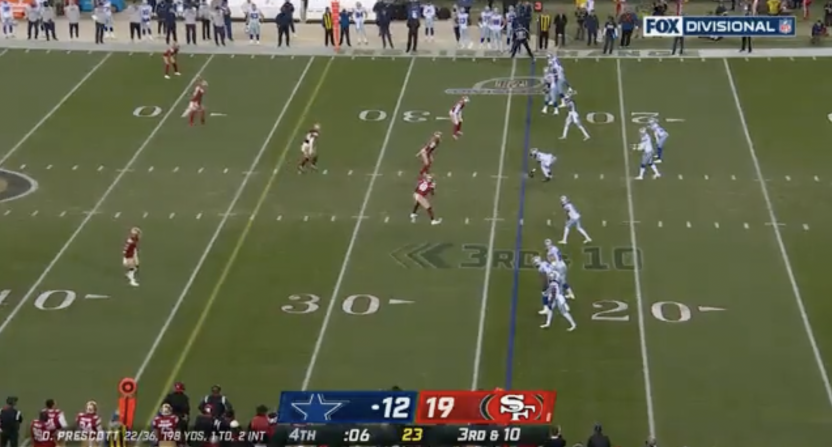 The Dallas Cowboys ultimately fell short against the San Francisco 49ers on Sunday in the Divisional Round of the playoffs, but it wasn’t for a lack of effort with the Cowboys featuring one of the strangest formations ever used in the NFL on the play on their final play of the game.

Dallas had one final attempt to go the length of the field from their own 24-yard line. Cowboys head coach Mike McCarthy and offensive coordinator Kellen Moore got extremely creative with their final attempt which hilariously backfired.

The formation that the Cowboys ran out only featured one player on the offensive line, which happened to be running back Ezekiel Elliott under center to snap the ball.

Every other Cowboys player on the field aside from Dak Prescott was out wide to potentially either block or catch a pass from Prescott.

The play went about as well as expected. Ezekiel Elliot was destroyed by Azeez Al-Shaair. KaVontae Turpin also got lit up after a minimal gain.

The Cowboys needed a miracle on the final play… and this wasn't close. 😂

The 49ers advanced to the NFC Championship Game for the third time in four seasons! 🏈 pic.twitter.com/sBfE4182OY

Many around the NFL world saw this as the perfect ending to an extremely imperfect performance on Sunday for the Cowboys.

lmao yooo what kinda final play was that

Lmao the most cowboys final play of all time

“Alright Zeke, so first you’re going to line up at center, then snap it to Dak and then get absolutely leveled.” pic.twitter.com/1cvyXGql5U

This play is so Cowboys. The we wasted too much time in practice formation…Zeke at center getting trucked followed by the first player to touch the ball getting smoked. Bless your heart Cowboys
pic.twitter.com/ayOhkz4ayu

This play looked a lot like potentially the biggest special teams fail in NFL history from the Indianapolis Colts back in 2015, which featured former Colts punter Pat McAfee.

McAfee clearly saw the resemblance as well, taking to social media to offer his take on the play call.

“So like… with our play, the ball wasn’t supposed to be snapped… Their’s was way worse right?” tweeted McAfee.

So like… with our play, the ball wasn’t supposed to be snapped…

It likely wouldn’t have mattered what play they called given the situation. But this play certainly was not a bright spot in another playoff failure from Dallas.