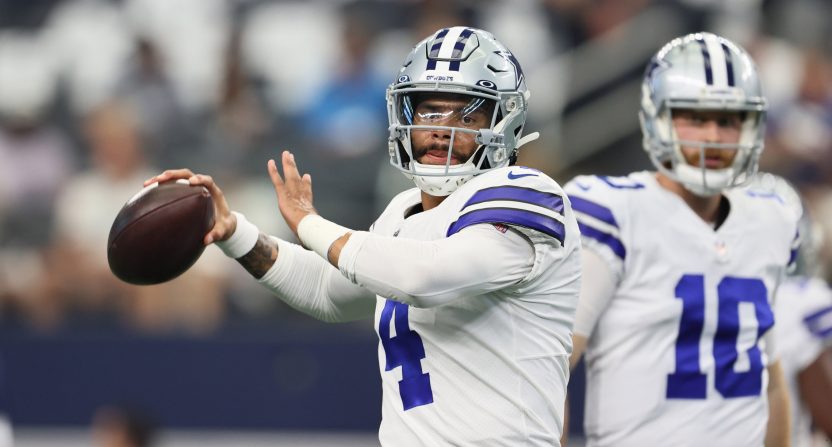 The Dallas Cowboys have not officially counted starting quarterback Dak Prescott out of this Sunday’s game against the Minnesota Vikings. However, they’re making sure to keep their options open as well.

Cowboys head coach Mike McCarthy started his press conference on Wednesday by saying that Prescott’s right calf “has improved every day” since he strained it at the end of the team’s overtime win over the New England Patriots two weeks back. McCarthy sounded fairly optimistic about Dak’s ability to play moving forward.

However, he also made it clear that the team is preparing for the possibility that backup Cooper Rush will make his first NFL start in Prescott’s place.

“I think it’s a matter of trying to make sure Cooper’s ready and make sure Dak is getting what he needs,” McCarthy said. “Until Dak clears the threshold of the rehab component with (associate athletic trainer/director of rehabilitation) Britt (Brown), we won’t make that determination on going full go until we get to that point. With that, we’ve got to make sure we get Cooper ready.”

On Friday, McCarthy said that while Prescott has been practicing, his calf remains “sore” and seemed to imply that he might sit Prescott this week in order to ensure he’s available for the team down the stretch.

Cowboys QB Dak Prescott (calf) was sore today after ramping up intensity in Thursday’s practice, coach Mike McCarthy said. On decision ahead about Sunday status: “It’s more than just one game. We’re obviously in our seventh game, so there is a ton of football left to play.”

The notion of Rush starting became even stronger when team owner Jerry Jones hyped up the backup during his radio appearance.

Jerry Jones on @1053thefan on Cowboys backup QB Cooper Rush: "I think he's just outstanding at executing our offense. He really makes outstanding decisions. He gives us the ability to maximize our supporting cast around him. We have the full playbook with him. That's a big deal."

While it remains to be seen if Rush, who had been in the NFL since 2017 but hasn’t appeared in a game since that year, will get his first start on Sunday night, NFL folks are already discussing the possibility and impact on social media.

If Dak doesn't end up going losing to Cooper Rush at home on National TV is a fireable offense, right? #Vikings

The Dallas Cowboys and whoever their quarterback ends up being will take on the Minnesota Vikings on Sunday night at 8:20 p.m.