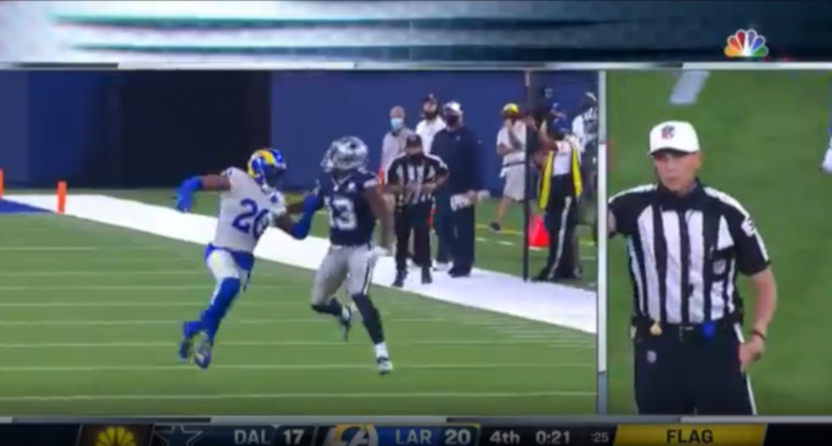 The Los Angeles Rams pulled off a 20-17 home win over the Dallas Cowboys Sunday night, but the finish of that game had a lot of people (including NBC’s Sunday Night Football broadcast) questioning an offensive pass interference call that stopped Dallas’ attempt to tie or win the game. With 31 seconds left, the Cowboys were facing second and 10 on their own 34-yard line, and Dak Prescott threw a deep pass that receiver Michael Gallup caught despite coverage from Los Angeles’ Jalen Ramsey and took to the Rams’ 19-yard line, a 47-yard gain. But that was called back thanks to offensive pass interference. Here’s how the play went down in real time, plus the initial announcement of the call from referee Tony Corrente:

Here’s the replay of it, complete with criticisms of the call from NBC analyst Cris Collinsworth and NBC rules analyst Terry McAulay:

Collinsworth says (around 0:14) “It’s always so hard to call that one. Terry, what did you think about that one?” McAulay says “You know, you want to see a clear extend and separation, Cris, and I think he’s got his arm out there, but I just don’t see him forcibly push him off,” and Collinsworth says “I agree.” And this was still a feature for NBC as they wrapped up their broadcast; here’s how Michaels called it in the outro:

And here’s how NBC wrapped up their broadcast. pic.twitter.com/PiOa1qXHEb

“Back to the big play. Ramsey with Gallup. Offensive interference is called, and that put the dagger into the Cowboys’ hopes. Ramsey knows it, sells it, gets the call, and the Rams wind up with the victory here in Los Angeles.”

So that’s certainly a notable amount of focus on that call, but one that feels deserved thanks to the state of the game when that happened. If that play had stood, Dallas would have had at the least a very solid chance to tie the game with a field goal, and they might have even won in regulation. And interestingly enough, if that had happened, much of the focus might have shifted to Los Angeles coach Sean McVay’s decision to punt on fourth and one on their final preceding drive, which drew a lot of criticism from the statistically-minded:

ESPN's win probability strongly disagreed with Sean McVay's decision to punt on 4th-and-1 from the Rams' 49 with 2:35 left, up 3 points.

That is a major error.

But that didn’t wind up being the controversial decision here at all thanks to this late call. And a lot of the discussion about this game is likely to be about that call.