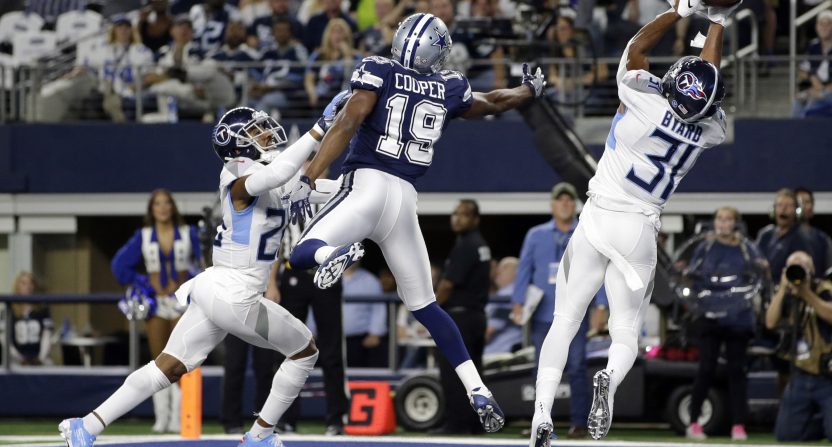 In October, Jon Gruden and the Oakland Raiders were reportedly seeking a first-round pick pick for wide receiver Amari Cooper. Rotoworld put it well on Oct. 15 when the rumors were floated that the Raiders were looking for a first-rounder in return for Cooper:

It’s safe to say they’re not going to get it based on Cooper’s inconsistency and Week 6 concussion.

Well, the Raiders did get that first-round pick on Oct. 22, from the Dallas Cowboys.

It was a bit shocking that the Raiders got a first-rounder from any team, but especially a team that wasn’t considered a Super Bowl favorite (like the Rams, Patriots, Chiefs, Saints, etc).

Cooper is a very good wide receiver, and is still only 24 years old. But he’s only under contract through 2019 (at $13.9 million) so the Cowboys are only guaranteed 1.5 years of his services. So, they either get him for just 1.5 years, or get him 1.5 years while having to give him a lucrative contract extension, which it appears they’ll do.

The main thing here is that the Cowboys were looking like an unlikely team to make the playoffs in 2018, even with Cooper. If you view it that way, you’re looking at it for Dallas as essentially just one year of Cooper for a first-round pick and a pricey contract extension.

And one game into Cooper’s career, the playoffs are certainly looking unlikely.

The Tennessee Titans went into AT&T Stadium and beat the Cowboys 28-14 on Monday Night Football.

FINAL: The @Titans get the MNF WIN! #TitanUp (by @Lexus) pic.twitter.com/d0bZAbKRkb

That’s despite Cooper playing well, with five receptions for 58 yards and one touchdown.

So while Cooper made an immediate impact for the Cowboys, he also showed why they shouldn’t have been giving up a first-round pick for him. This isn’t a team ready to contend for a championship. Heck, they’re a 3-5 team that Five Thirty Eight gives only a 10% chance to make the playoffs in 2018 following the Monday night loss.

Cooper is a very good NFL receiver, but he’s not a season, franchise-changing wide receiver. That was the only kind of talent the Cowboys should’ve considered giving up a first-round pick for.

And you could argue it wouldn’t have even been worth doing unless that player was under control for several years, rather than the 1.5 years Cooper is under team control for. But we all know how Jerry Jones operates, and it’s why the Cowboys continue to be stuck in mediocrity or worse.