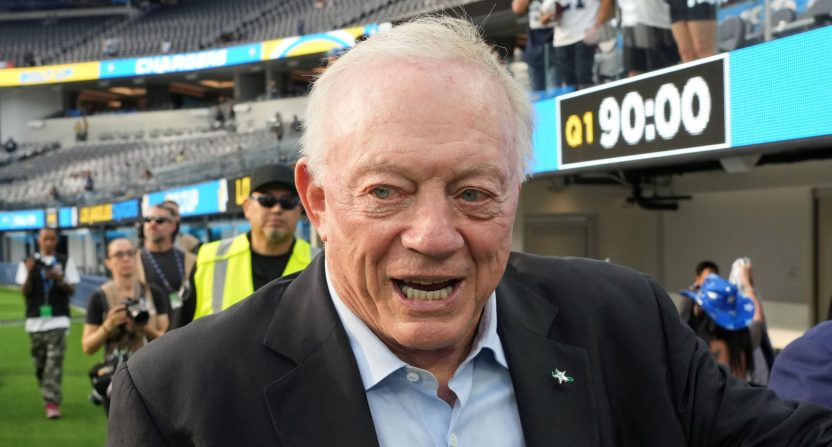 Many around the NFL thought that the Dallas Cowboys would struggle mightily after the injury to star quarterback Dak Prescott, but the team has not faltered to this point.

Led by undrafted quarterback Cooper Rush, Dallas has won each of the games that he has started this year after Monday’s victory over the New York Giants in an NFC East rivalry game.

This victory put Rush in some rare company, starting his career with a 3-0 record as Dallas’s starting quarterback in his career.

The last undrafted player that has accomplished this was legendary quarterback Kurt Warner in 1999 with the St. Louis Rams.

Rush has been extremely steady thus far, and Cowboys owner Jerry Jones offered some extremely bold praise for the unheralded quarterback on Tuesday.

According to longtime Dallas Cowboys reporter Todd Archer, Jones told 105.3 The Fan that he believes Rush has “the makeup of a top quarterback”.

He went on to say that he is “certainly playing as well as anybody could’ve expected”.

Jerry Jones said on 105.3 The Fan that Cooper Rush has “the makeup of a top quarterback, adding, “let me say this he’s certainly playing as well as anybody could’ve expected.”

The second part of Jones’ statement is certainly correct, but it certainly appears very early to say that Rush has shown that he could be a top quarterback in the NFL.

His stats have been extremely average through two starts, recording only two passing touchdowns on the year while failing to eclipse 250 passing yards in a game yet in his career.

Rush’s ability to keep the Cowboys afloat without Prescott is extremely commendable and is surely appreciated by Dallas fans.

That being said, Jerry Jones may be a bit off on his assessment of Rush unless the veteran quarterback can show a little more production on offense moving forward.