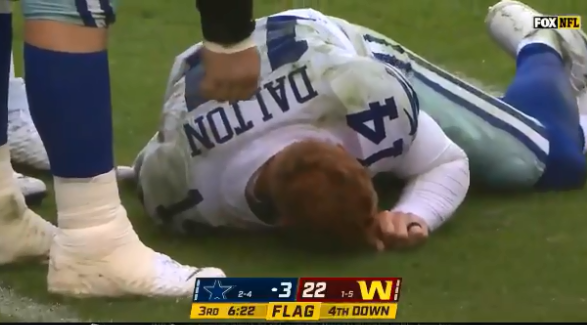 The Dallas Cowboys came into Sunday’s game against the Washington Football Team down a quarterback follow Dak Prescott’s injury last week that him with a compound fracture and dislocation of his right ankle. Veteran QB Andy Dalton stepped into the spotlight today but he too left the game with a nasty injury following an ugly helmet-to-helmet hit from Washington’s Jon Bostic.

The play in question came around midway through the 3rd quarter. Washington was handily beating Dallas 22-3, further drawing the NFC East into a malaise of mediocrity. Dalton was attempting to get something going on offense when he took off on a run out of the endzone, sliding feet-first as to avoid major contact from a defender. Unfortunately, that didn’t stop Bostic from targeting Dalton’s head and going helmet-to-helmet.

Jeez, this is a nasty hit by Jon Bostic on Andy Dalton. Bostic ejected. pic.twitter.com/9MkYbJY1WO

Jon Bostic is going to get a hefty, hefty fine. pic.twitter.com/pgcL8fRVb8

The hit was so severe that Dalton’s helmet popped off when he hit the ground and the 32-year-old laid on the ground for a long time.

The Cowboys 3rd string QB is now warming up as Andy Dalton took a hit to the head while sliding. pic.twitter.com/HxONR9a6Be

Third-stringer Ben Dinucci, who had never played an NFL snap before, entered the game for Dalton. For his part, Dinucci got off to a good start with his very first pass.

As for the hit, Bostic was immediately ejected and can expect to be fined pretty strongly by the league. Also, not too many people were surprised to see who it was who had taken the cheap shot.

Jon Bostic has been a dirty player since college. Continuing to allow garbage like that to happen just leads to more dirty hits. Suspend him.

A lot of folks remember the 2013 Sugar Bowl when Bostic went helmet-to-helmet on Teddy Bridgewater on a hit that certainly raised a lot of eyebrows.

Bostic was also fined $21,000 by the NFL in 2013 following a head-down hit while he played for the Bears. He can expect something similar, or even worse, waiting for him from the league this week. As for Dalton, he’s out of the game and will hopefully receive the proper concussion protocols he’ll need.