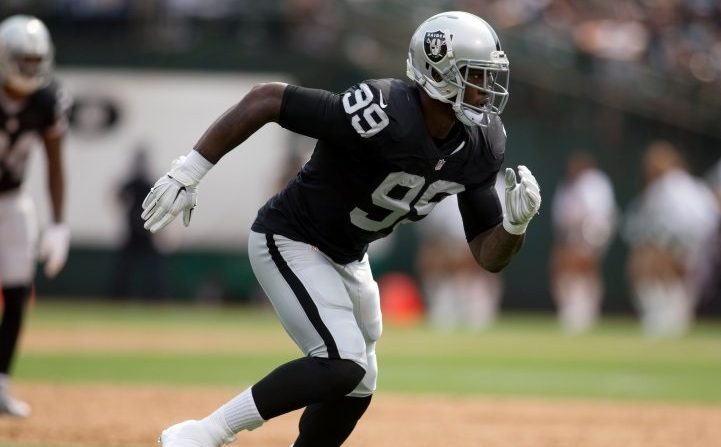 Smith hasn’t played in the NFL since 2015 due to a myriad of off-the-field issues, including four DUI arrests and a domestic violence plea deal. Glazer notes that Smith is “clean and sober now,” and says it’s “incredible how much (Smith) has turned his life around.”

Breaking: The #dallascowboys have signed former Pro Bowl LB/DE Aldon Smith to a one-year, marking the end of a 4-year absence. Clean and sober now, incredible how much he’s turned his life around. @NFLonFOX @dallascowboys

The @dallascowboys have agreed to terms with former Pro Bowl Edge Rusher Aldon Smith on a 1-year deal. Smith is coming back after a 4-year layoff. pic.twitter.com/DaZIiiykEr

Smith, 30, has served multiple NFL suspensions, and is currently suspended indefinitely. However, NFL Network’s Jim Trotter recently reported that Smith was in the process of applying for reinstatement, and the Cowboys clearly like those chances under the new CBA.

While Smith being back in the NFL after a four-year layoff is eye-opening on its own, maybe the most surprising part of this deal is that he’s getting more than the league minimum. NFL Network’s Mike Garafolo reports that Smith “gets a $2 million base value,” and can earn $2 million in sack incentives, for up to a $4 million deal.

Aldon Smith getting a penny more than the minimum is incredible after being out of the league since 2015. He gets a $2 million base value and $2 million in sack incentives on his one-year deal.

That would suggest that the Cowboys weren’t the only team interested in Smith’s services, or at least his agent made Jerry Jones believe that was the case.

From 2011-2013 with the San Francisco 49ers, Smith was as good as any pass-rusher in the NFL. The Mizzou product had 42 sacks over those three seasons, with a particularly ridiculous 2012 campaign featuring 19.5 sacks, three forced fumbles, and an interception. He earned first-team All-Pro honors, and ranked No. 7 on NFL Network’s top-100 players (which is voted on by active NFL players) in the summer of 2013.

Smith’s most recent season featured 3.5 sacks with the Oakland Raiders in 2015 in nine games. He was suspended in-season (November) after an August arrest in which he was charged with hit-and-run, DUI, and vandalism. He re-signed with the Raiders in 2016 and applied for reinstatement, but the application was denied, forcing him to miss the 2016 and 2017 seasons. And in 2018, the Raiders finally released Smith following an alleged domestic violence incident.

We have no idea what Smith’s skill level and football shape is at this point, but NFL teams are desperate for pass-rushers. If he’s *anything* at all like the player he was in the early 2010s, the Cowboys could get a great bargain. However, there’s obvious risk in paying more than the league minimum for a guy that last played in the NFL five years ago and has had numerous off-the-field incidents.

UPDATE: Seven weeks after the signing, Aldon Smith has reportedly been reinstated by the NFL. Smith is cleared to participate in the Cowboys’ (virtual) offseason program.

Source: NFL Commissioner Roger Goodell has reinstated Cowboys pass-rusher Aldon Smith, who was suspended indefinitely and has not played in the NFL since 2015. He is now eligible to participate in team activities.