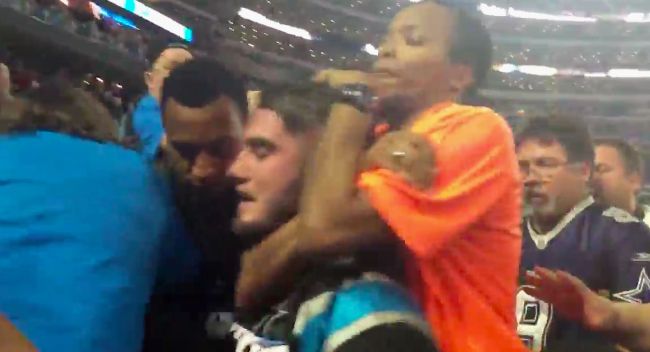 TMZ reports that the Arlington, TX police department is investigating an incident involving an AT&T Stadium security guard and a Carolina Panthers fan that occurred during the Cowboys-Panthers game on Thanksgiving.

A disturbing video taken by fans in the AT&T Stadium stands hit Youtube over the weekend, showing a security guard putting a Panthers fan in a headlock, and essentially choking the fan.

The Panthers fan, John Small, filed a police report on Monday, and the Arlington PD is looking into the incident as a possible Class A misdemeanor assault, according to TMZ:

The fan — John Small — filed a police report on Monday morning and now we’re told cops are actively investigating the situation as a possible Class A misdemeanor assault.

Small insists he did NOTHING WRONG and is asking other fans to come forward with video if they have it.

The Panthers fan, John Small, explained the incident on his Facebook account, and said the security guards told him that he was being “disruptive”:

In the last five minutes of the game, security approached me and told me I would have to leave because a complaint had been filed against me, calling me “disruptive.” They would not tell me anything specific and said they would not ask me to leave again. I politely stood up for myself and before I knew it they were nudging Mom out of the way to get to me and at that point, I walked into the aisle and was immediately put into a chokehold. The video shows what happened. As you can see both Dallas and Panther fans stood up for me and told the guards that I had done nothing wrong. I would appreciate anyone who took videos to post them for me.

Even if Small was being a “disruptive” fan, putting him in a chokehold is certainly not the best way to handle it.