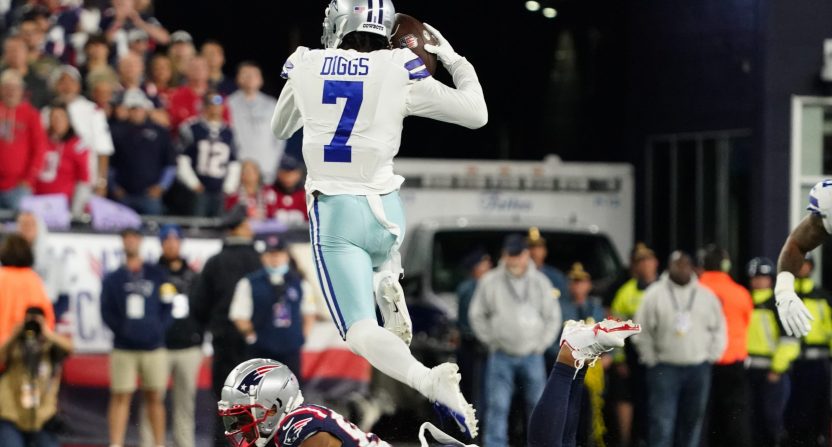 It’s hard to be a cornerback in the NFL. Even harder to get noticed by the casual fan. You need more than elite coverage skills. Self-promotion helps. Think Deion Sanders, Josh Norman, Richard Sherman. They talked a great game and backed it up on the field. That combination is the main reason we know their faces. But a new star has emerged with less hype.

Dallas Cowboys cornerback Trevon Diggs might be the most unlikely Defensive Player of the Year candidate we’ve ever seen. In a league that annually produces surprises, no one’s ascension has been more startling. He’s gone from a reckless rookie to a spectacular sophomore. The second-year man is making plays at a pace that has us all scrambling to the record books.

Diggs’ seven interceptions are tied for the most in his team’s first six games in NFL history. Pittsburgh Steelers Hall of Famer Rod Woodson is the only other one to accomplish that feat (1993) in the Super Bowl era. Diggs has at least one interception in his first six games, joining Minnesota safety Brian Russell (2003). He has already brought back two for touchdowns, including this fourth-quarter return last weekend vs. the New England Patriots.

Diggs’ heroics are reminiscent of the glory days of Deion, who was a key addition that led Dallas to its third Super Bowl victory in the 1990s. The franchise hasn’t been back to the big game since that 1995 season. Diggs’ flair for the dramatic has its fanbase dreaming big. But unlike Sanders, who was a major free-agent acquisition, Diggs was a mildly heralded talent. A second-round pick out of Alabama.

Yes, Alabama is a football factory, churning out prospects at an assembly-line rate. Look at the wide receivers alone lately: Julio Jones, Amari Cooper, Calvin Ridley, Henry Ruggs III, Jerry Jeudy, etc. But Alabama isn’t exactly known as Cornerback U. When the Cowboys selected Diggs in the 2020 draft, he was the 51st overall pick. When a player is taken in the second round, teams are just hoping that he becomes a solid starter.

Dallas previously had a star cornerback. Byron Jones enjoyed a Pro Bowl 2019 season, but the Cowboys let him walk as a free agent. They needed someone to fill that position. No one expected Diggs to be a superstar. The Cowboys expected a lot of growing pains. Perfectly normal for a rookie playing one of the game’s most demanding positions.

Diggs’ trial by fire included getting burned. Often. He gave up big plays while being matched up against some of the league’s top wide receivers like Terry McLaurin and D.K. Metcalf. At least Diggs had the presence of mind to knock the ball out of Metcalf’s hands for a touchback that denied the Seattle Seahawks a score.

D.K. Metcalf TRIES TO WALK INTO THE ENDZONE AND Trevon Diggs FORCES THE TOUCHBACK

The 2020 season was a learning experience, but Diggs was resilient. You learn to be tough when your college coach is Nick Saban. Diggs originally arrived at Alabama as a wide receiver hoping to follow in the pass-catching footsteps of sibling Stefon Diggs. However, Saban had a different plan that shocked Trevon Diggs, who immediately called his older brother.

“Honestly, I cried. I called him and I was crying,” Diggs said on the Michael Irvin podcast. “I’m like, ‘Bro, he’s trying to switch my position’… He’s like, forget all that, you know what you gotta do. You know what you’re supposed to do. You played it before, let’s just get to the grind. Let’s get to it.”

Saban had good reasons to switch Diggs to defense.

“A lot of times guys have a vision of what they’d like to be,” he said. “But because of his skillset: he had great ball skills, really good hands, long, very athletic, I just thought the guy would be a really good corner. I thought there would be more value for his future if he was a corner.”

Diggs entered this season better prepared. First, he had a full training camp unlike last year due to the pandemic. Second, Dallas had a new defensive coordinator in Dan Quinn. And third, Diggs practiced against the Cowboys stellar wide receivers: Amari Cooper, CeeDee Lamb, and Michael Gallup. Diggs was a new man with a new number, switching from No. 27 to No. 7 – the jersey he wore at Alabama.

He was supposed to be better. But certainly not this. The preseason odds for Defensive Player of The Year featured either Aaron Donald or Myles Garrett at the top. The No. 1 cornerback was Jalen Ramsey. Diggs wasn’t on anyone’s radar.

Today, Myles Garrett (a league-leading eight sacks) remains the betting favorite but Diggs is second. While Diggs is impactful, he gambles. Last week was a good example of that, as he surrendered a long score as Kendrick Bourne hauled in a 75-yard touchdown.

MAC JONES 🚀 FOR THE LEAD pic.twitter.com/HXfv9SMpOw

A poor angle by safety Damontae Kazee contributed to the touchdown but Diggs took responsibility.

Diggs’ aggressive nature is one reason that despite being third-best in lowest passer rating allowed (29.2), he’s not rated among the top cornerbacks by Pro Football Focus. However, even PFF, concedes that Diggs has been excellent on third down.

Trevon Diggs in coverage on 3rd&4th down:

Diggs may never be a shutdown corner, but if he keeps making play, the Cowboys will live with the results. The NFL record for interceptions is 14, set by Dick “Night Train” Lane in 1952. Shockingly, Lane did so in a 12-game season. Even though the season is now 17 games, it would still be an enormous feat for Diggs to reach that record.

For now, enjoy Diggs’ highlights. He’s an unlikely star on a Cowboys team full of stars.