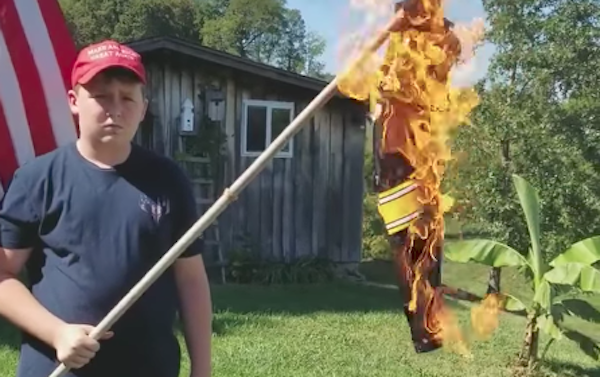 This has been an interesting past few days for the NFL. The President of the United States is occupying his time on the job by tweeting about what the league should do with its players who kneel during the national anthem, causing millionaire owners to lock arms with their players down on the field, and the Chicago Bears even won a game this week.

But the most shocking part of everything relating to the NFL this week is the reaction from some its “fans” to the players using their platform to bring awareness to those watching around the country. Many have recorded themselves burning team apparel (that they already paid the league for) and preaching their disdain for the NFL and its players.

To save you a little time (and brain cells) from traveling down this disturbing rabbit hole, we have found some of the craziest YouTube reactions to the activism displayed around the league in Week 3.

Not the wind socks!

This guy apparently acquired some rare wind socks after working at Super Bowl XXV back in 1991 and wanted to prove a point by burning them and all their worth. Scott Norwood wishes that the memories of this Super Bowl would burn up in flames also.

A murder charge in 2000 was not enough for this guy to want to burn the jersey of former Baltimore Ravens linebacker Ray Lewis. But once he and a number of current Ravens put their knees on the grass during the national anthem on Sunday, that was the final straw.

Finally, an excuse not to watch the Colts this year

The Indianapolis Colts likely are not going to do to well this season and this guy is using last weekend’s events to burn the rest of his season tickets. Hopefully, he knows that the NFL has already received his money for the purchase of those tickets.

He must not have been an owner

Of all the teams in the NFL, the Green Bay Packers are known for being the only one which allows fans to own a share of the franchise. Well, now this guy is throwing away his chance of that ever happening.

If you’re going to make a video reaction claiming you were once a fan, at least know the names of the players on the roster.

Thanks to the Oakland Raiders kneeling during the national anthem on Sunday night, now this guy is going to have a non-obstructed view out of his rear windshield. Thanks a lot, Raiders!

I wonder who these guys voted for?

Despite only one player on the Carolina Panthers (Julius Peppers) not standing for the national anthem on Sunday, these guys still felt the need to burn some of their Panthers gear. They also claim that NFL players burn and stomp on the American flag (not even close to being true), so they are two very informed individuals.

Even the kids are getting involved

In this video, we have a young man burning the jersey of Pittsburgh Steelers quarterback Ben Roethlisberger. So buddy, Roethlisberger didn’t do anything in his past for you to lose respect for him?

At least he wished the NFL best of luck…

Despite saying he is no longer going to watch the NFL, this guy oddly wishes the league luck for the future. Thanks?

There was definitely some pre-production for this video

We saved the “best” for last as this woman recorded herself burning her Pittsburgh Steelers gear (after about five attempts). But the greatest part is before she even burns anything, she rips off her Steelers shirt to revel a Trump shirt. Yes, she did that.