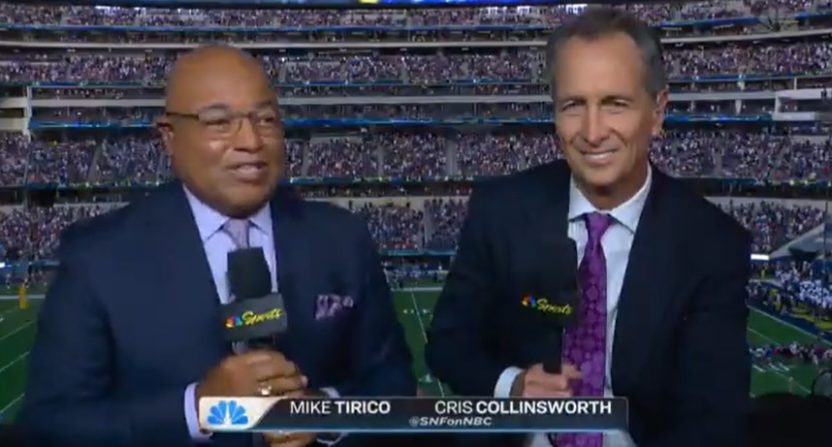 The slide onto camera has become as much a part of Cris Collinsworth’s broadcasting as anything. But on Thursday night’s NFL season-opening game between the Buffalo Bills and Los Angeles Rams, it was absent.

Immediately before the game, NBC cameras were panning around SoFi Stadium before they went to the broadcast booth. In past years, that first shot would have been of Al Michaels, with Collinsworth off camera and sliding in later. But now with Michaels gone, the slide seems to be a thing of the past. When the cameras went into the announce booth, Collinsworth was already in position, next to play-by-play man Mike Tirico.

Is the Collinsworth slide no more? pic.twitter.com/Y5KoqA3Xlq

The NFL world had several different reactions to this development.

Please bring it back, @CollinsworthPFF https://t.co/9YP8E3XQTp

Saving it for the better game Sunday night. 🤷🏻‍♂️ https://t.co/1FTGCSe47w

In the past, Collinsworth has not done his slide in certain weeks. During the COVID-19 season of 2020, restrictions in place generally meant that it wasn’t plausible. Yet, in those previous instances, it did return. And while that may paint a glimmer of hope that it will return on Sunday when the Dallas Cowboys host the Buccaneers, or soon after, that does not appear to be the case. The slide is likely gone forever, at least from Collinsworth.

Collinsworth told me he has probably retired the slide but he doesn't mind if Herbie brings it to Amazon. https://t.co/96Ex9YN81F

Time will tell if Collinsworth changes his mind or if Michaels’ new partner, Kirk Herbstreit, makes it part of his pregame ritual.