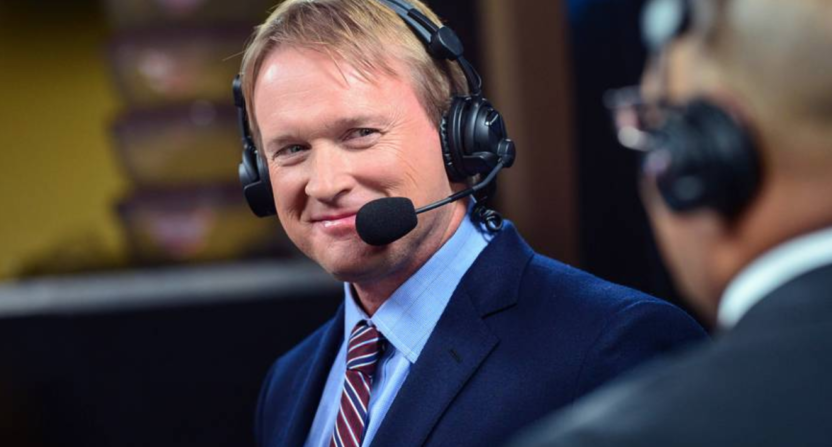 He is a Super Bowl winning coach. At one time, he was considered an offensive genius. He has a career winning percentage of .556. He has transitioned to a career in broadcasting. Of course, we’re talking about…

Their offensive reputations were enhanced by coaching arguably the greatest wide receivers of all time. (Billick had Randy Moss when he was the offensive coordinator for the Minnesota Vikings. Gruden had Jerry Rice as the head coach in Oakland.) They both won Super Bowls with marginal quarterback play on teams propped up by elite defenses. (Billick did it with the Baltimore Ravens in 2000, Gruden with the Tampa Bay Buccaneers in 2002.)

Did you know Billick owns a better winning percentage than Gruden (.540)? The only substantial difference between the two is that the 63-year-old is nine years older. But that’s it. They are virtually the same guy.

What’s the point here? Why is Gruden’s name often mentioned whenever there is a coaching vacancy? And why for God’s sake is it often a college job? According to various reports, Gruden might be a candidate for the University of Tennessee job. And the current ESPN Monday Night Football analyst has left the door open for possibly returning to coaching.

Fake news reached a new level of absurdity last weekend. A Tennessee restaurant apologized for spreading a false rumor that Gruden was dining in Knoxville with Peyton Manning. According to ESPN, Gruden was in Seattle for the MNF Falcons-Seahawks broadcast.

Is Gruden a candidate for the Vols job? There are some conflicting reports. Football Scoop has reported that Gruden “has no interest in being the next head coach at Tennessee.” Gruden’s Monday Night Football broadcasting partner Sean McDonough also doesn’t think it’s going to happen.

All this seems silly. If you asked if Billick was a possible candidate, you probably would be laughed at. However, as stated earlier, there isn’t much difference between these guys.

OK, OK. Yes, Gruden has a Rocky Top connection. He began his coaching career as a graduate assistant at Tennessee in the 80s. His wife is a former Vols cheerleader and Tennessee alumna. Their son is currently a student at the university. But Gruden hasn’t worked in college since 1989. He hasn’t even coached football anywhere since he was fired from Tampa in 2008.

Since then, Gruden has collected checks as ESPN’s highest-paid employee in the Monday Night Football broadcast booth. For a generation of teens, that’s what he’s best known for. So why would you entrust this person with the keys to one of the better jobs in college football?

It’s not just Tennessee. Gruden’s name has been mentioned with various openings over the years and many have been college jobs, such as LSU and Notre Dame. Gruden grew up in South Bend where his father was an assistant coach for the Fighting Irish. So if Brian Kelly ever got the axe, he’d be a natural fit there, right?

There is a simple question to ask for all of this: Why? What has Gruden done on the college level to make anyone think he could win big at Tennessee?

Currently at Walmart at UT Knoxville. It's a sign! #grumors pic.twitter.com/ydoH1vqAlB

NFL coaches going back to college is nothing new. Nick Saban is the gold standard. However, guys like Saban and Jim Harbaugh were successful college head coaches previously and weren’t away from school for long.

Saban won the 2003 BCS national championship at LSU and then left for the Miami Dolphins gig. He quickly realized that it’s harder to win in the NFL where player acquisition is limited by the draft, free agency and salary cap. Saban went to back to college in 2007 and has built Alabama into the envy of college football with four more national championships.

Harbaugh left Stanford for San Francisco and got the 49ers to the Super Bowl in his second year. But after clashing with the front office and ownership, Harbaugh exited after the 2014 season. He has done a solid job in three seasons at Michigan.

For guys who were never college head coaches previously, it’s more of an unknown. For every Pete Caroll (two-time champion at USC after failing with the New York Jets and the New England Patriots), there is a Jim Mora, Lovie Smith, Ron Turner, Bill Callahan, Mike Riley or Dave Wannstedt.

As a college football coach, Gruden is a risk. Just because he’s on television doesn’t mean that he’s equipped to navigate the unique culture of big-time college athletics.

The world has changed a lot since Gruden was a tight ends coach at Pacific in 1989.

Gruden also will have to connect with boosters for fundraising – and have a bunch of other off-field duties that have absolutely nothing to do with coaching.

Maybe Gruden is ready for all this. Maybe he’s the next Pete Carroll.

The great thing about being a college football coach is that you’re the CEO. You’re in charge and there are no artificial limits to talent acquisition. You can sign as many blue chip prospects as you want. With that power, however, comes considerable pressure from sometimes unreasonable fan bases.

If Tennessee thinks it can recapture the glory days of the 1990s with Gruden, it probably is mistaken. To win at the highest level, the Volunteers need a guy who has proven he can win at the major-college level.

Jon Gruden isn’t that guy either. Suggesting he should be the Tennessee coach seems as ridiculous as suggesting Brian Billick could be the Volunteers savior.