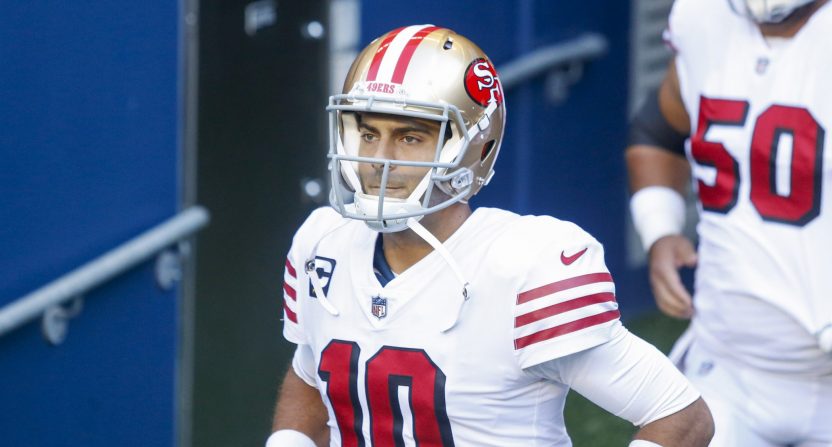 This league moves faaaast and the quarterback carousel is a blur of late. With that in mind, here are 10 NFL presumed starting quarterbacks from the end of 2020 who are likely to lose those gigs by the time Week 1 of the 2022 season rolls around.

Teddy Bridgewater, Carolina Panthers: The Panthers are making no guarantees about this season, let alone 2022, and the lion’s share of Bridgewater’s $23 million 2021 salary is locked in. Carolina can save $21 million by parting ways with him next offseason. He’s not enough of a playmaker to survive that.

Drew Brees, New Orleans Saints: There’s still a chance he returns in 2021, but if that happens, it will almost certainly be the 42-year-old’s last.

Sam Darnold, New York Jets: The league’s lowest-rated passer from the 2020 campaign is likely to be replaced by Justin Fields or Zach Wilson in the draft, or possibly even Deshaun Watson on the trade market. He probably won’t be the starter at the outset of the 2021 season.

Jimmy Garoppolo, San Francisco 49ers: It certainly sounds like the 49ers are losing patience in Garoppolo, who has struggled to remain healthy. He’s basically on a year-to-year contract now and is probably fighting for his starting future regardless of where he plays in 2021.

Daniel Jones, New York Giants: Dude threw 11 touchdown passes in 14 games this season. He’d need an epic turnaround to avoid being benched in 2021 and following a path similar to Darnold’s beyond that, especially in that market.

Drew Lock, Denver Broncos: The league’s fourth-lowest-rated passer from 2020 probably won’t be the team’s locked-in starter this summer. And even if he wins out temporarily, it’s obvious he’s not starting material in this league on a long-term basis.

Cam Newton, New England Patriots: Doubt he’s back in New England or considered a starter anywhere else in 2021 after throwing just eight touchdown passes in 15 starts in 2020. Newton looks shot as he approaches 32. He hasn’t been good since his 2015 MVP season.

Ben Roethlisberger, Pittsburgh Steelers: Big Ben looks as though he’s very close to the finish line, and he recently stated he wants to “go one more year.” The 2021 season will be his swan song.

Alex Smith, Washington Football Team: The 36-year-old’s comeback story is great, but he threw more interceptions (eight) than touchdown passes (six) in 2020. He’s not the long-term answer, and he might not even be the starter this summer.

Nitchell Folebisky, Chicago Bears: Regardless of whether you consider Nick Foles or Mitchell Trubisky to be the current QB1 for the Bears, both are toast after terrible 2020 showings.

Derek Carr, Las Vegas Raiders: Jon Gruden has never seen convinced that Carr is the long-term answer for the team he took over three years ago. Carr likely has one more year to prove he’s worthy of the starting role. Just like Bridgewater, he has a big-play allergy.

Jared Goff, Detroit Lions: They took on his salary, but the new regime in Detroit won’t likely tolerate poor or inconsistent play from Goff for very long. He might have bought himself an extra year with the trade from the Los Angeles Rams, but the Lions can save $10 million by parting ways next offseason.

Matt Ryan, Atlanta Falcons: Team brass wasn’t exactly effusive about the 2016 MVP returning in 2021, let alone 2022. Another failed campaign could spell the end for the 35-year-old, who could very well retire rather than join another team at that point.

Tua Tagovailoa, Miami Dolphins: Just nine starts into his NFL career, there are already questions about Tua’s ability to lead an NFL offense, and he’s the subject of trade rumors. He’s a poor sophomore campaign away from being viewed as a backup entering 2022.