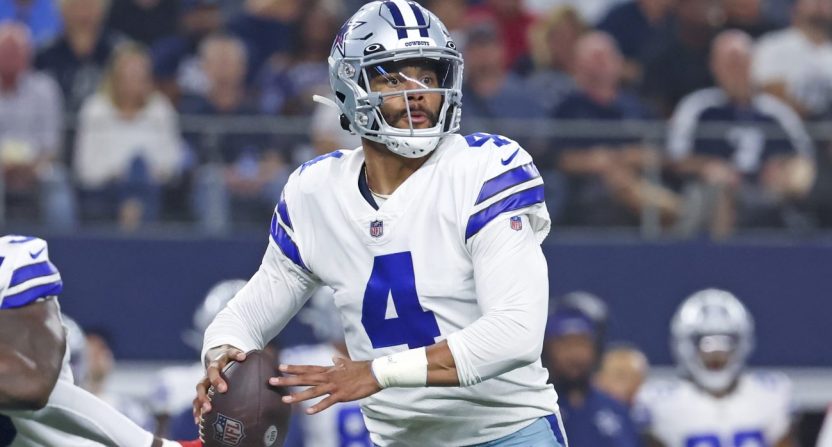 Dallas Cowboys quarterback Dak Prescott was seen back at practice for the team Thursday. The Cowboys star was seen holding a football and working out alongside the Cowboys’ director of rehabilitation Britt Brown.

Prescott’s recovery seems to have gone well and he is expected to be back next week against the Philadelphia Eagles.

Cowboys QB Dak Prescott has incorporated holding a football in his side work with director of rehabilitation Britt Brown. pic.twitter.com/Gd51VHCXas

Cowboys owner Jerry Jones spoke on Prescott’s progress earlier this week  Backup Cooper Rush has led the team to a 3-1 record heading into this Sunday’s game against the L.A. Rams.

“I don’t know that you could ask for better news technically, physically in how it’s responding, how it’s healing so to speak,” Jones said. “So all of those things are on go and I don’t know that as we bid bye to each day if considering the injury, considering the location of the injury, I don’t know that you could make any more progress. There’s some things here about healing that again I often say only the man upstairs knows how that works, but he’ll have a big week and he’ll be hard on himself getting it ready to go.”

Rush’s success has allowed Prescott to take his time coming back to the team, but if Rush and Cowboys upset the Rams Sunday, will this lead to a quarterback controversy as some have predicted?