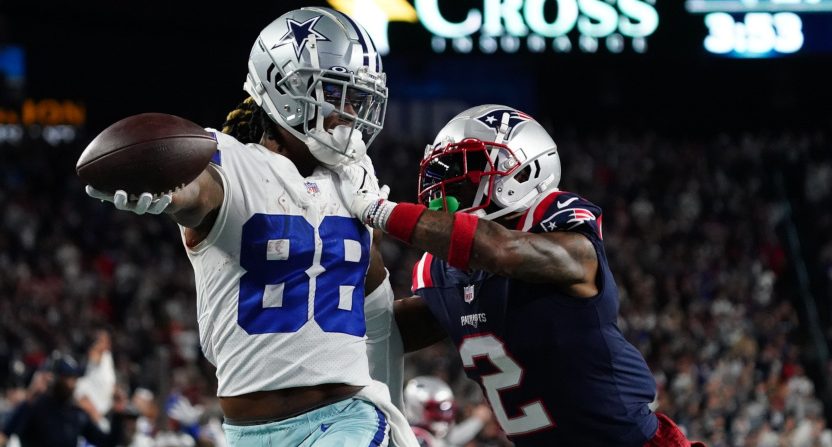 The Dallas Cowboys pulled out a 35-29 overtime win in New England against the Patriots Sunday, and did so on a great throw from Dak Prescott to CeeDee Lamb. The teams went back and forth for a while before that, with a pick-six from Trevon Diggs putting Dallas up 26-21 with 2:36 left, Mac Jones responding with a 75-yard passing touchdown to Kendrick Bourne with 2:21 left and a successful two-point conversion pass to Jacobi Meyers, and the Cowboys then responding themselves with a nine-play, 55-yard drive capped off by a 49-yard field goal from Greg Zuerlein that sent the game to overtime. Dallas then forced New England to punt on their possession, and then Prescott led a seven-play, 80-yard drive that finished with this 35-yard touchdown pass to Lamb:

DAK TO CEEDEE FOR THE WIN IN NEW ENGLAND. #DallasCowboys pic.twitter.com/kh34E4rPsU

What’s interesting there is while two Patriots’ defenders do get through the blocking, they have to pay attention to Prescott as a runner. That means they can’t close on him as quickly as they might for a less-mobile quarterback. And that means while Prescott’s throw here did come on the run, there wasn’t anyone imminently tackling him or even getting a hand in his face.

But this is still a remarkable throw from Prescott, travelling around 35 yards in the air. And Lamb does well to haul it in and then beat his defender (Jalen Mills) to the end zone. And that gave the Cowboys their fifth-straight victory, improving them to 5-1 on the year.

However, this may come with a cost for the Cowboys. After the game, it came out that Prescott was injured on that play:

Dak Prescott came thru the tunnel and hopped on one leg for 25 to 30 yards with Ezekiel Elliott at his side. It was the right leg that he was favoring. #Cowboys

We’ll see what that leads to. Hopefully it won’t be anything too serious for Prescott. He certainly played well in this game, completing 36 of 51 passing attempts for 445 yards with three touchdowns and an interception. And he definitely threw a great last pass.