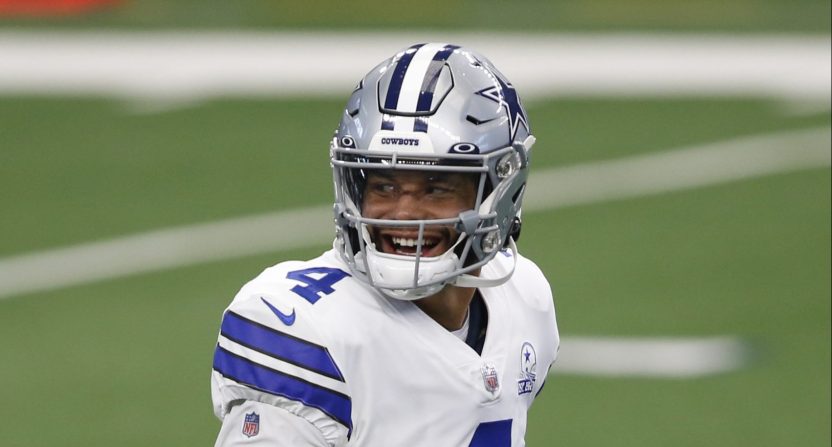 Dak Prescott bet on himself when he received the franchise tag last season. But in Week 5, Prescott broke his ankle and his future suddenly got cloudy. After much uncertainty, and the franchise tag deadline on Tuesday, it appears that Dak and the Cowboys have struck a deal that’ll keep the franchise QB in Dallas for the next four years.

The Cowboys put out a statement to the media saying that they had “agreed to terms on a new contract” on Monday with Prescott but declined to reveal details of that contract, saying “details will be released at a formal press announcement on Wednesday.” That hasn’t stopped NFL insiders from obtaining details via sources and it appears that Dak is going to make bank.

The basic terms of the contract is a four-year, $160 million deal that can be bumped up to $164 million. In addition, Dak gets $126 million of that guaranteed, with an NFL record $66 million signing bonus, while he gets a no-trade clause and no tag provision. For the Cowboys, this deal will lower Dak’s cap hit for this shrunken salary cap season, giving the Cowboys a bit more flexibility for 2021.

More details: Dak Prescott’s deal averages $42M over the first 3 years of the deal — $126M guaranteed. That means the final year will be worth $34M… which would be time to redo it. https://t.co/SwjHaFBJPE

This also means that Prescott will be back at the negotiating table in four years when he turns 31. A thread by Yahoo’s Charles Robinson indicated how important the timing is. When Dak gets back to renegotiate his next contract, it’ll be when the NFL is in their next TV contract, which is set to roughly double in price. That’ll raise the salary cap and as Patrick Mahomes is in the middle of a contract that runs through 2031, Prescott may surpass him and become the highest paid NFL player at that time.

5. Wild part of this deal? If all goes as planned, #Cowboys and Prescott will be back at the negotiating table for his next extension in 3 years, when TV/gambling money kicks in. That means this deal may have put Prescott on course to be the highest earning player in NFL history.

It’ll be another gamble for Dak Prescott but he’s already bet on himself once and it paid off. It’ll be interesting to see if that keeps going on in the future.