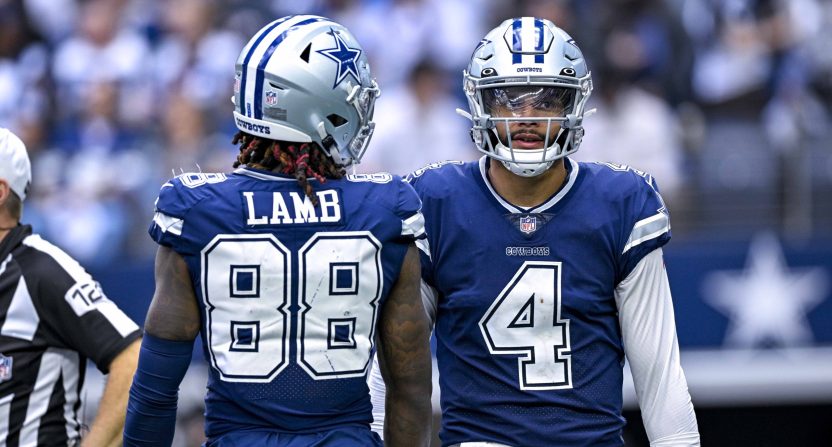 Go ahead. Dismiss the Dallas Cowboys if you want. They have certainly earned mockery. It’s tough to give a team the benefit of the doubt when it has won only three playoff games over the past quarter of a century. This franchise is living off a past that many in its fanbase weren’t even alive to see.

Jerry Jones has been marketing tradition, intrigue, and glamor because he hasn’t been able to sell substantial winning in decades. But perhaps this is the year they finally return to championship glory.

The Cowboys (8-3) are not great. However, they may not have to be. In a wide-open NFC, Dallas has a puncher’s chance to get back to the Super Bowl for the first time since the 1995 season.

The AFC is probably a two-team race between the Kansas City Chiefs and the Buffalo Bills. In the NFC, no one has separated themselves from the pack. There are at least four teams you could make an argument for (the Philadelphia Eagles, the Minnesota Vikings, the San Francisco 49ers, and the Cowboys). We haven’t even mentioned the Tampa Bay Buccaneers, who still have Tom Brady.

This season, there are no juggernauts. No great teams have emerged, especially in the NFC. That’s great news for Dallas, a solid but not spectacular collection of talented players. The Cowboys, as per usual, bring a lot of star power with Dak Prescott, Ezekiel Elliott, CeeDee Lamb, Micah Parsons, Demarcus Lawrence, and Trevon Diggs. They could also add another big name if Odell Beckham Jr. signs as a free agent. With the emergence of Tony Pollard and a defense that has allowed the second-fewest points per game (17.0) in the NFL, these Cowboys are good enough to reach the Super Bowl.

“They have all the elements to make a Super Bowl run,” NFL Network analyst Marc Ross said on NFL Now the day after Dallas’ 28-20 Thanksgiving victory over the New York Giants. “They have Dak at quarterback. They have playmakers on offense with CeeDee Lamb and Tony Pollard. They can run the ball with Zeke. The offensive line is playing well and will get Tyron Smith back. Then on the defensive side, arguably the best defense in football. They can swarm teams, especially with the best player in the league, a possible MVP candidate in Micah Parsons, who can take over games.”

Dallas and Buffalo are the only teams that are in the top-seven of the league in scoring offense and scoring defense. The Cowboys (+8.4) are second only to the Bills (+10) in average scoring margin. That’s empirical evidence that points to Dallas being a legit Super Bowl team.

The @dallascowboys have all the talent to make a Super Bowl run but could be another quick playoff exit due to their penalty epidemic @nflnetwork pic.twitter.com/G2S2ap6yH3

Look at the remaining schedule. At worst, Dallas should finish at least 12-5. Their next three opponents have losing records: the Indianapolis Colts, the Houston Texans, and the Jacksonville Jaguars. The schedule toughens down the stretch with the Eagles at home and road games at the Tennessee Titans and Washington Commanders.

Of course, the Cowboys will ultimately be judged by the postseason. The narrative of them being overhyped won’t change until they at least reach the conference championship—a place they haven’t been since 1995 when the franchise won its last Super Bowl behind Troy Aikman, Emmitt Smith, and Michael Irvin.

The burden of high expectations falls on the shoulders of Prescott. Fair or unfair has nothing to do with it. When you’re the quarterback of America’s Team, that’s the way it is. Prescott has led the Cowboys to a 4-1 record since returning from the fractured right thumb injury he sustained in the season-opening loss to Tampa Bay. However, his passer rating (95.3) is his worst since his rookie year, due largely to six interceptions in six games. He’s missed Amari Cooper, who was traded away in the off-season to the Cleveland Browns in a salary-cap move. Perhaps the addition of Beckham will help. Dallas gave Prescott a lot of money to be their franchise quarterback. He’ll be defined by what he does in the playoffs. Right now, the enduring image is the final play from last year’s season-ending home loss to San Francisco.

Prescott, like his team, hasn’t been great. But if he’s good, that might just be good enough for the Cowboys to end their Super Bowl drought.

Jake Ferguson showing off the vertical leap and picking up some extra yardage. pic.twitter.com/RLGuRXu8Zj