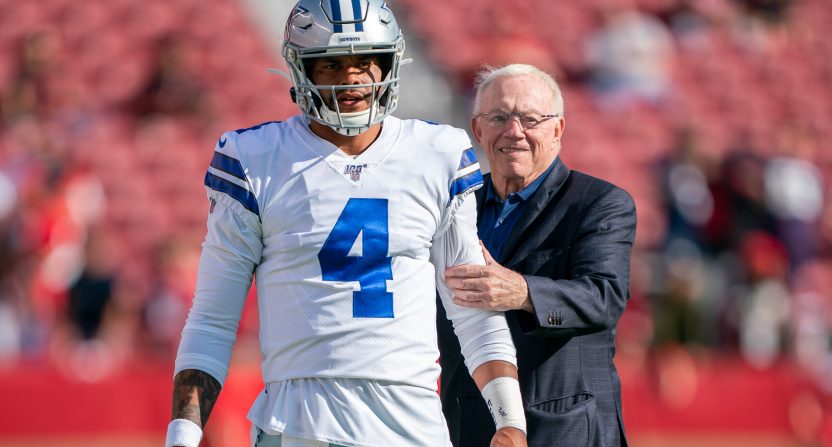 Jerry Jones often says, “deadlines make deals.” Well, last week’s deadline came and went without a deal. Some people put off chores or doing their taxes. The Dallas Cowboys’ owner put off signing Dak Prescott to a contract extension – and it will cost him.

The inability for the Cowboys to come to an agreement with Prescott is stunning and could wind up being one of the biggest mistakes in franchise history. Prescott bet on himself and won a $31.4 franchise tag salary for 2020. He’ll bet on himself again for potentially a bigger payday, and possibly free agency in 2021.

It’s rare for starting quarterbacks to be in this position. It has only happened twice. Since the franchise tag was implemented in 1993, only Drew Brees and Kirk Cousins have played under the tag. Both wound up going to other teams.

If Prescott leaves, it will be the most high-profile Cowboys divorce since Jones and coach Jimmy Johnson split in March 1994. This could haunt the Cowboys, who have been unusually quarterback-lucky over the past two decades.

Tony Romo, an undrafted free agent, played 14 seasons for Dallas and performed at a Pro Bowl level for most of his career. Prescott, a fourth-round pick in 2016, has already made the Pro Bowl twice. It’s not easy to find good quarterbacks. Just ask the Cleveland Browns,  New York Jets, Miami Dolphins, Chicago Bears, Cincinnati Bengals, Washington (name to be determined later), etc.

The Cowboys have twice stumbled into good fortunate on the cheap – and now they want to haggle over the price of retaining their latest find. It takes a certain arrogance to believe you can uncover another gem for the third time. Good luck with that.

Sure, we don’t exactly know how much Prescott was asking for. And yes, there are competitive concerns over the salary cap possibly dropping in 2021. But if you’re not going to pay a franchise quarterback, are you committed to winning?

Prescott will turn 27 next week. How many quarterbacks under the age of 30 are clearly better? Patrick Mahomes and Lamar Jackson, absolutely. Those guys have MVP hardware. Deshaun Watson, probably. That’s it. That’s the list. Lobby for Carson Wentz, who signed an extremely team-friendly contract extension last summer, if you want. Wentz, the second overall pick in 2016, and Prescott were in the same draft class.

Consider this: Prescott is durable, having never missed a start in his four seasons. He has won a playoff game. You can’t say the same for Wentz. Prescott owns a better career passer rating (97.0) than Wentz (92.7) and a superior record as a starter (40-24 vs. 32-24).

However, this isn’t about Prescott vs. Wentz. It’s about Prescott vs. the Cowboys, who continue to treat him like he’s an unproven commodity. And not like he has the potential to be the championship quarterback they have been searching for since Troy Aikman in 1990s.

Has Jones forgotten about some of the guys he had before Romo and Prescott? Let me remind you of the likes of Quincy Carter, Chad Hutchinson, Anthony Wright, Ryan Leaf, and Clint Stoerner.

Prescott has excelled despite being handicapped by Scott Linehan’s offense. Once Linehan was fired and new coordinator Kellen Moore installed some updates, Prescott’s numbers soared. The Cowboys went from an Ezekiel Elliott-powered attack to Prescott’s offense.

Last year, he enjoyed his best season setting career-highs in passing yards (4,902), touchdown passes (30), and yards per attempt (8.2). Prescott’s statistics would have been even better if not for the fact that his receivers led the league in dropped passes (51).

Prescott has absolutely benefited from the addition of Amari Cooper, who was acquired in a mid-season trade in 2018. But a quarterback’s raw accuracy is independent of how good his receivers are. NFL analyst Cian Fahey ranks Prescott as the fourth-best quarterback, behind only Jackson, Mahomes, and Aaron Rodgers.

Nick Shook of Around The NFL pointed out that Prescott was also the league’s best deep-ball passer in 2019. And when you consider that the Cowboys are adding speedy first-round pick wide receiver CeeDee Lamb, Prescott could have the best collection of wideouts in the NFL.

So, if his numbers and performance are this good, why is Dallas dragging its feet? Excellent question. Again, we don’t know what Prescott’s demands are. Reportedly there were disagreements over the length of the deal (Prescott wanted four years, Cowboys five). We also don’t know what new coach Mike McCarthy thinks of Prescott.

Whatever the differences are, it’s up to Jones and Dallas to work it out and keep Prescott. If they franchise him again next season, Prescott will make $37.7 million for 2021. Dallas, facing a possible shrinking salary cap, might opt to let Prescott hit free agency. That’s not ideal. The Cowboys would rather work out a cap-friendly long-term extension. Maybe they will.

Deadlines make deals. The next one is a year away, and the Cowboys are on the clock.