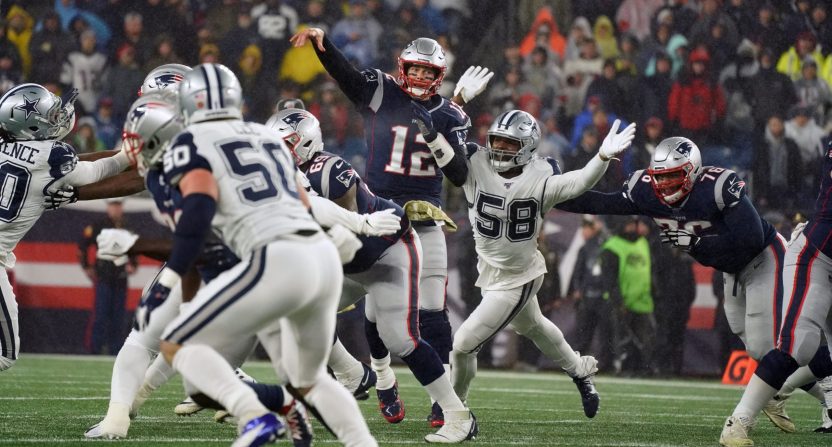 The Cowboys are certainly one of the NFL’s biggest franchises and “America’s Team” brings a storied history full of Super Bowl rings and championships with them into the game. However, they do bring one very surprising fact with them that they’re hoping to undo once and for all.

While the Cowboys are 15-4 all-time against the Buccaneers, they are 0-5 all-time against Tom Brady. That’s right, the Cowboys have never beaten Brady in his entire 22-year NFL career. All five previous games came when Brady was playing for the New England Patriots, of course.

The last time Brady and the Cowboys squared off was in 2019, a game that the Patriots won 13-9. It’s also worth noting that in three of five losses to Brady, the Cowboys failed to score a touchdown. Not sure how that’s Brady’s doing but there must be something in the air.

However, Dallas does have a few things working for them. They are 3-0 when playing a defending Super Bowl champion in Week 1, having most recently done that in 2012 when they defeated the defending champ New York Giants. The Giants, of course, defeated Brady and the Pats in the prior Super Bowl.

If the Cowboys do plan on defeating Tom Brady for the first time ever, defensive end Randy Gregory seems to know how to do it.

“You got to make him feel uncomfortable,” Gregory said. “With him, he likes to stand tall. You’ve got to make sure you keep bodies around him, even if you’re not hitting him, just being able to get around him, get your hands up, different things like that. Knock him off the spot. Just not really give him a chance to pick us apart as a defense.

“Our main goal as a defensive line is to be disruptive, get in the backfield, and get to the quarterback, and cause issues that way. But just not making him feel like he can drop back and stand in the same spot that he dropped back in.”

We’ll find out of the Cowboys can buck history Thursday night in Tampa.