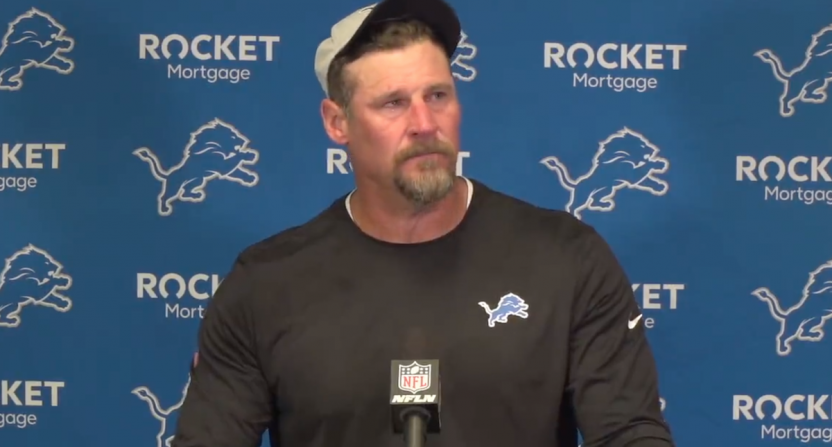 Is there crying in football? Maybe not since Dick Vermeil was coaching the St. Louis Rams to a Super Bowl XXIV victory in 2000 and later with the Kansas City Chiefs.

But Detroit Lions coach Dan Campbell had no issue showing his emotions after his team’s heartbreaking Week 5 loss to the Minnesota Vikings on a last-second field goal, 19-16. And by tearing up during his post-game press conference, he showed how much he cares about his players and why he might finally be the guy to restore some football pride in Detroit.

The Lions hung tough with the Vikings throughout the game thanks to a strong effort from their defense. Linebacker Jalen Reeves-Maybin gave Detroit a chance to win after forcing a fumble from Minnesota’s Alexander Mattison, ripping the ball from the running back’s left arm with less than two minutes remaining.

Mannnn I did not like what mattison did in this game. He had space to cut this up in the C gap and I think he tried to bounce it outside because… of… the… safety? idk what he's looking at on half of these. And then the fumble to top it off. Take your 4 yards and punt dude pic.twitter.com/JhXwsDtoRS

That gave the Lions a chance to tie a ballgame they probably should’ve lost badly. But a conservative game plan by Vikings head coach Mike Zimmer and offensive coordinator Klint Kubiak — pounding the ball with Mattison rather than capitalize on a clear advantage with receivers Adam Thielen and Justin Jefferson against a young, undermanned defensive backfield — allowed Detroit to keep the score close.

Handed a gift — and a short field, taking over at Minnesota’s 20-yard line — the Lions pounced on the opportunity. Three plays later, D’Andre Swift scored a touchdown and it appeared that the game would go to overtime. Campbell had other ideas, however. He wanted to win. (He probably didn’t want his defense to go through overtime, either.)

Jared Goff saves his one good throw for the 2-point conversion AND THE LEAD 🦁pic.twitter.com/x3YqzXQEi5

The Lions went for a two-point conversion and took the lead on probably the best throw quarterback Jared Goff made all day, hitting KhaDarel Hodge at the back of the end zone to take a 17-16 lead.

(Goff hadn’t played very well to that point, completing 21-of-35 passes for only 205 yards. Yet if you were asking “Who is KhaDarel Hodge?” you zeroed in on part of the problem. With Quinton Cephus breaking his collarbone, Detroit played the likes of Hodge, Kalif Raymond, and Trinity Benson at receiver on Sunday. This may give fourth-round pick Amon-Ra St. Brown a chance, however. The rookie caught seven passes. He’s not viewed as a No. 1 receiver, but may end up in that role out of circumstance.)

Was Detroit finally going to win its first game of the season, probably one of only a few for a rebuilding roster? It certainly looked possible. But the Vikings still had 33 seconds and two timeouts, which were enough for Kirk Cousins to drive for a game-winning field goal by Greg Joseph.

Welp, we had those 33 seconds (or however many real-life minutes it was), Lions fans 💔 pic.twitter.com/erJSSEXOiL

Sunday’s crushing loss was the Lions’ second such defeat of the season. In Week 3, Justin Tucker hit an NFL-record 66-yard field goal as time expired — with the ball bouncing off the crossbar, then between the uprights — for another 19-17 result. The 0-5 Lions could possibly be 2-3 if not for those last-second kicks.

(Detroit fans will also point out, however, that the team likely wouldn’t be winless if Campbell and defensive coordinator Aaron Glenn didn’t opt for a prevent defense, rushing only three defensive linemen instead of maintaining the scheme that kept them competitive through the rest of each game. If there’s been one shortcoming during Campbell’s short tenure as Lions head coach, it’s playing a prevent scheme with an undermanned secondary.)

Jared Goff and the Detroit Lions are "GOING DOWN IN HISTORY"!

This is like the Sam Darnold "OUT INDEFINITELY" graphic. pic.twitter.com/ieiInMSgIj

This time, the crushing result got to Campbell as he spoke to the media (and presumably, in the Lions’ locker room before he met with the press). His eyes were red and puffy, and his voice caught in his throat as he explained how badly he felt for the players who had just given such a strong effort.

“When you see your players give all that they have and you lose that way, it’s tough,” said Campbell, trying to laugh off his emotions.

“You know, you don’t want that for them. But we’ll be better for it. And credit Minnesota, but we made the one mistake that cost us. And so, ultimately, we didn’t do enough to win. But I was proud of ’em. And I love the fight they have in ’em. And I love the grit.”

An emotional Dan Campbell after another heartbreaking #Lions loss: pic.twitter.com/sbJfEs7NhE

Some might laugh or sneer at Campbell tearing up at the podium. Others might joke that if the coach is this emotional after five games, what will his emotional state be after enduring a 17-game season that will surely include plenty more losses?

But by showing how much he cares, how much he feels for his players, Campbell won over a whole bunch of Lions fans. (He probably won over his locker room a while ago.) After three years of Matt Patricia going to the podium and acting like the team was losing because the players didn’t execute his brilliant schemes, most Detroit fans will take a guy who is that emotionally invested.

Maybe it’s not the right approach. Perhaps being closed off and hardened emotionally is the better way to go for an NFL coach. But some, such as Vermeil, Pete Carroll, and Bruce Arians have shown that it’s all right to show some emotion, to allow that release rather than keep it bottled up.

Eventually, Campbell will have to win games. He’ll have to show he’s suited for the job tactically. Even a culture change and buy-in have to yield results. But for now, the Lions are playing hard for their coach. They’ve been competitive in nearly every game this season. The roster needs some more talent and development. But Campbell may be the guy to see it through.