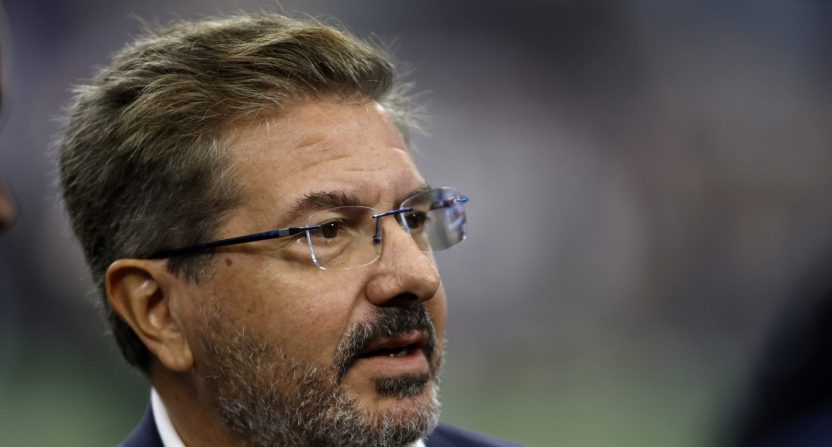 The rampant allegations of abuse and mistreatment made by various people in the Washington Commanders organization might have made some owners think about how they might do a better job running their organization. Not Daniel Snyder, however, who continues to see himself as the victim.

A U.S. House Oversight Committee has been investigating the Commanders for some time over allegations of sexual harassment, misogyny, and financial fraud. After ducking them on a yacht in Europe during hearings into his organization Snyder finally agreed to testify earlier this year, doing so virtually and in private.

Apparently, Snyder wasn’t happy with the response to his testimony or the fact that the issue was not put to bed. According to Michael Phillips of the Richmond Times-Dispatch, lawyers representing the NFL franchise sent a nine-page letter to the House Oversight Committee over their inquisition into Snyder.

Attorneys for the #Commanders sent a letter to House Oversight Committee Chair Maloney, saying in part the purpose of the Committee’s probe was “to destroy Dan Snyder and his family and attempt, with deception, innuendo, and half-truths, to drive him from the (NFL).” pic.twitter.com/Y7n8ODvFw3

The letter,  which was written by former Virginia Rep. Tom Davis, who now works for the law firm, chastises the committee for doing what he alleges is essentially a witch hunt.

“From the beginning, the Committee set out with a singular purpose—to destroy (team owner) Dan Snyder and his family and attempt, with deception, innuendo, and half-truths, to drive him from the National Football League. This investigation reeks of the lowest form of politics and its only purpose is personal destruction,” said the letter.

“Rather than seeking the truth, the Committee has ignored exculpatory evidence and buried favorable witnesses. And this Committee has embraced individuals whose lack of integrity and decency would under normal circumstances universally prohibit them from ever being relied on by a Congressional committee.”

The letter also levied all the blame for the organization’s issues on former GM Bruce Allen, whose emails were at the center of last year’s scandal that ended Jon Gruden’s time as head coach of the Las Vegas Raiders.

“It is widely acknowledged that the single most significant step the Team took to remedy its toxic workplace was to rid itself of Mr. Allen,” the letter contends. “The fraternity-house culture that Mr. Allen instilled in the Commanders’ organization is the principal reason that the Commanders came under investigation in the first place.”

It’s unclear why Snyder decided to fire a shot across the committee’s bow but there’s almost certainly going to be a response to it.

In the meantime, the NFL world certainly had some reactions to the bold strategy.

The strongest people in our community are those brave souls fighting Dan Snyder and standing up for their truth.

Consider his strength: one letter of intimidation from his lawyers gets repeated everywhere.

But, these women are stronger, and they are right. #ReleasetheReport

.@kevinsheehanDC is going in on how stupid Dan Snyder's letter was last night 😂. Says he's amazed at "how limited intellectually" Dan and his team are 😂. How the "basic, simple math," calendar dates, etc. of blaming Bruce Allen "don't add up."

Classic letter. Full of big words all signifying nothing. Reeks of desperation. But, alas, Danny is not going anywhere. Yet. #waittosee https://t.co/GFu1lCbMBD