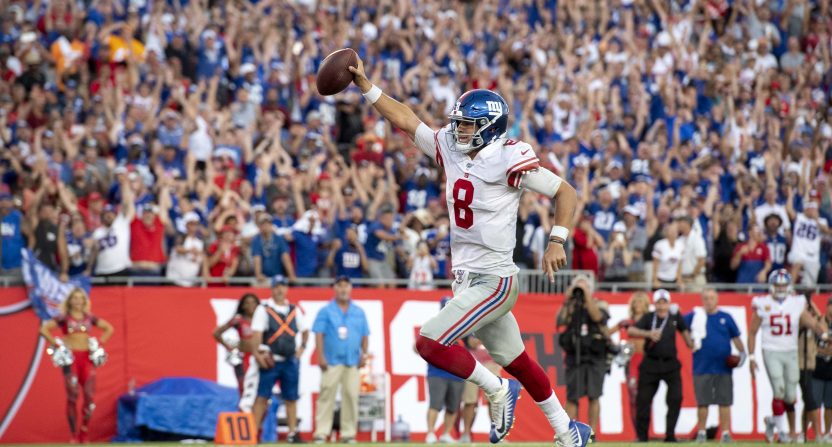 Daniel Jones made quite the impression in his first NFL start. The Duke product completed 23-of-36 passes for 336 yards and two touchdowns, and added two touchdowns on the ground in the New York Giants’ 32-31 win over the Tampa Bay Buccaneers.

The second touchdown was particularly crucial. With the Giants trailing 31-25 and facing a 4th-and-5 with just over a minute remaining, Jones ran for a go-ahead touchdown.

Daniel Jones scrambles for the TD on 4th down to give the Giants the lead!!!#NYGvsTB pic.twitter.com/9OPgG9q1uj

The sixth overall pick of the 2019 draft looked like a veteran in the pocket, and tossed dimes all over the field.

The future is here for the New York @Giants.#NYGvsTB pic.twitter.com/0XkYZ9me5d

Jones’ emergence is even more important with the Giants losing star running back Saquon Barkley to an ankle injury.

Even with Jones’ big day and go-ahead touchdown, the Giants were lucky to escape with a 32-31 victory. Tampa Bay rookie kicker Matt Gay missed a 34-yarder as time ran out.

But — outside of Tampa Bay — the story from this game is that the Giants may have found their new franchise quarterback. Sunday’s performance would certainly suggest they have.

Jones and the Giants have a great chance to get their record to 2-2 with a home game against the Washington Redskins in Week 4. The line for the game is the Giants are favored by 3 points. If you believe in ‘Danny Dimes’ you could make some good money with Sportsbet.