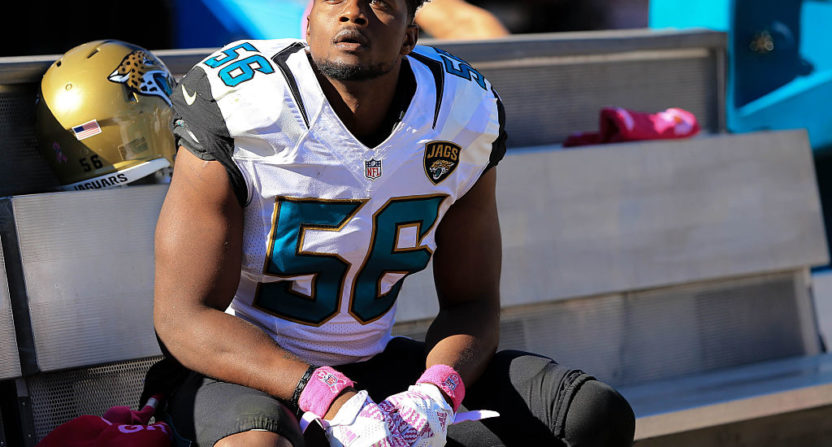 Jacksonville Jaguars defensive end Dante Fowler got himself into some hot water Tuesday evening. Fowler was arrested and charged with simple battery and criminal mischief by police in St. Petersburg following an altercation that took place at an apartment.

According to details reported by Greg Gauman of the Tampa Bay Times, Fowler was enraged by a comment about his driving in the parking lot at an apartment complex. As told in the police report of the incident, Fowler allegedly stepped out of his car and engaged in a verbal exchange with another man. Fowler then allegedly “hit the man, knocked his glasses off and stepped on them.” Not content to leave a man with busted spectacles, Fowler then allegedly took the man’s bag of groceries and tossed them in a nearby lake. So it sounds like Fowler should have been cited for littering on top of these other charges.

The guy Fowler hit, stomped on his glasses and threw his groceries in the lake was 55 years old.

Fowler has been released from jail on a $650 bond, but the incident comes just days after Fowler reached a court agreement regarding a citation for careless driving.

From the Tampa Bay Times:

Tuesday’s arrest came just four days after an agreement was reached in court Friday to withhold adjudication against Fowler on a citation of careless driving from a June 11 incident that caused $1,500 in property damage. The citation shows Fowler backed into a parked vehicle, and he was also cited for operating a vehicle without insurance. He also has four speeding tickets in Jacksonville over the last two years, including a $450 citation in June 2016 in which he pleaded no contest to going 98 miles per hour at 1 a.m. in a 55 mph zone.

According to Mike Kaye of First Coast News, Jaguars DE Dante Fowler has at least 10 traffic tickets dating back to December 2015.

I have been told many times, Dante Fowler is the one player that makes it hard to sleep at night for Jags folks. Getting evidence why today.

The Jaguars released a statement to address the incident with the typical response you expect from a sports team forced to respond to such an incident:

“The Jaguars are aware of the situation involving defensive end Dante Fowler Jr. and are currently gathering more information. The team has been in communication with Dante. No further comment will be made at this time.”

As we also know, the NFL could still weigh in with some disciplinary action as well. Roger Goodell and his personal conduct policy will likely not look kindly on these latest actions by Fowler, even if the legal system takes it easy on the alleged scofflaw.

That might actually be a violation of Fowler’s Eighth Amendment rights.