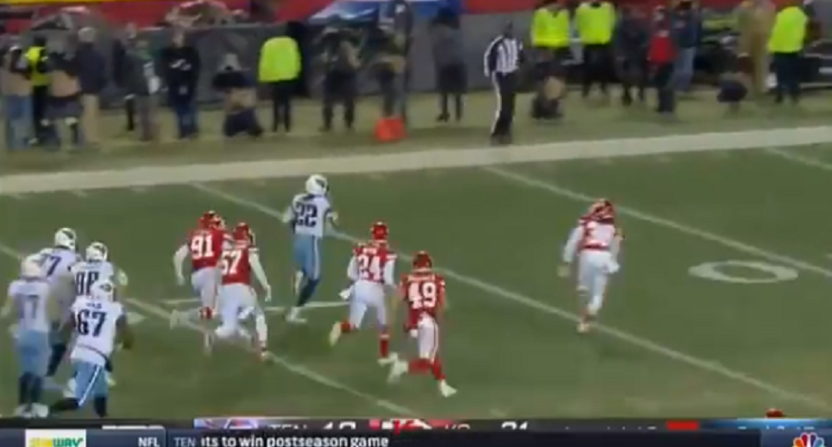 There are many reasons the Kansas City Chiefs blew an 18-point halftime lead to lose Saturday’s AFC Wild Card round game 22-21 to the Tennessee Titans. There was highly questionable Kansas City playcalling in the second half, poor execution from the Chiefs, and the Titans certainly made some great plays of their own (to go with getting some fortunate bounces).

But you really hate to see when *effort* is part of the problem, and especially when it’s from a future Hall of Famer.

Chiefs cornerback Darrelle Revis basically gave up on two runs from Tennessee’s Derrick Henry that were crucial plays in the game.

The first one came early in the fourth quarter on this 35-yard touchdown run from Henry. NBC’s Tony Dungy called out the  “terrible effort” from Revis (No. 24):

Tony Dungy calls out Darrelle Revis' effort on the Henry TD run and deservedly so. pic.twitter.com/PWRijoatMb

And the other play came on a game-clinching 22-yard run from Henry on 3rd-and-10 with under two minutes to go. This time it was Dungy’s NBC partner, Rodney Harrison, calling out the (lack of) effort from Revis: “Once again Darrelle Revis wants no part of that tackle.”

That play drew plenty of reaction on Twitter, with Denver Broncos linebacker Brandon Marshall even saying that Revis “needs to just hang the cleats up” if the effort is going to be that bad.

If Revis is going to give that type of effort. He needs to just hang the cleats up then

Look at No. 24 Darrelle Revis on Derrick Henry's game-clinching run. Gave up on the Chiefs most important play of the season. What an embarrassment. pic.twitter.com/k9B0oVeCfp

Revis’s effort on the Henry third down run is amazingly bad. I saw it again and thought it was bad live but it’s worse than bad upon review

If that was the last game of Darrelle Revis’ career, it was a lousy way to go out. He was involved in one of the wackiest plays in playoff history (on the wrong side) and he gave no effort on the Henry run/Mariota block play. #TENvsKC

This is definitely not what the Chiefs were hoping for when they signed the four-time All-Pro in November. It was no secret that Revis’ physical talent — at the age of 32 — wasn’t what it used to be, but the Chiefs surely at least expected better effort to be there.