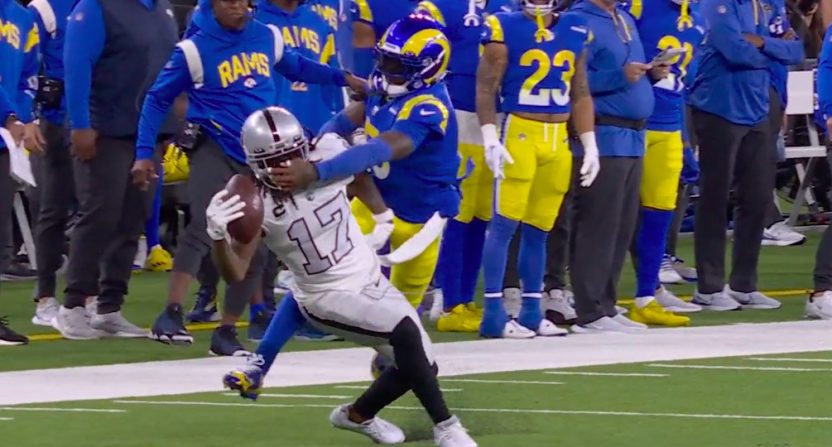 Davante Adams and Jalen Ramsey went head to head in a battle of titans Thursday night.

Adams struck the first blow just over a minute into the game, with the Las Vegas Raiders wide receiver hauling in a spectacular one-handed catch against the Los Angeles Rams cornerback for a 32-yard gain.

Jalen Ramsey interfering with him was not gonna keep Davante Adams from making this one-handed catch.pic.twitter.com/6lTRwXIwLs

Ramsey got flagged for pass interference on the play, which the Raiders declined.

NFL Next Gen Stats noted that after that catch, Adams had caught all 11 of his career targets with Ramsey listed as the nearest defender, with those catches going for 106 yards and a touchdown.

Adams has caught all 11 career targets with Jalen Ramsey as the nearest defender for 106 yards & a TD.#LVvsLAR | #RaiderNation pic.twitter.com/83k2uOYLo6

Adams is having a monster season, entering Thursday with 79 catches (fifth in the NFL) for 1,176 yards (fourth) and 12 touchdowns (first). He’s a good bet to earn his third straight All-Pro appearance.

There’s a tendency to underestimate Ramsey these days. He’s been around a while, seven seasons, but he’s still only 28. He gives up the big play now and then, but he’s still one of the best in the league. Pro Football Focus recently graded him as the third-best cornerback in the NFL, behind only Patrick Surtain II of the Denver Broncos and Sauce Gardner of the New York Jets.

JJ ain't playing tonight. Neither is Tyreek. Matter of fact I don't see Diggs or Kupp out there either

Lol shut up dude — Adams is definitely better than any of the guys you mentioned. Stop trolling.

Bro has to go against DK and now Davante Adams in back to back weeks pic.twitter.com/xTwlXEJ0Lp

Deebo Samuel, Davante Adams, and DK all own him lolz

Ramsey been getting COOKED lately 😂

literally everybody to Jalen Ramsey this year: pic.twitter.com/jFF6BzVPAN