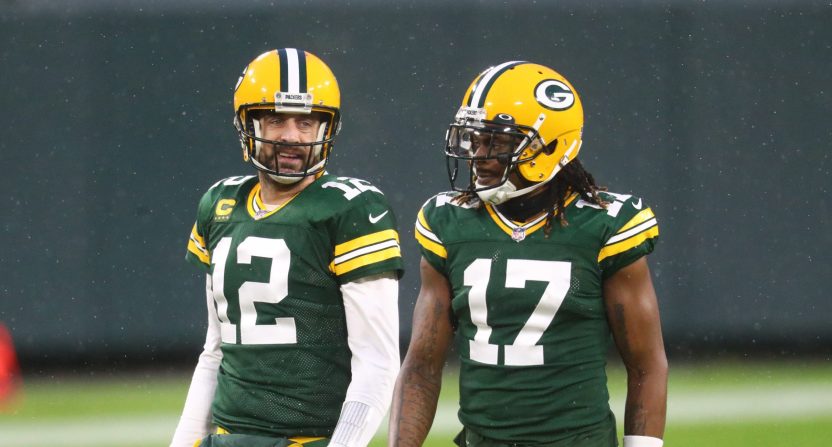 The NFL world has seen a lot of shocking news in recent days as free agency and trades have changed the landscape of the league. That was certainly the case again Thursday evening with it was reported that the Green Bay Packers have traded star wide receiver Davante Adams to the Las Vegas Raiders for draft picks and a player just days after finalizing a contract extension with Aaron Rodgers.

Rodgers had made it clear on many occasions that he wanted to see the Packers invest in playmakers and especially do what they could to keep Adams in-house. Team brass reiterated their intention to keep both superstars as well. Rodgers officially signed a four-year extension with the Packers last week and the team reportedly was set to franchise-tag Adams as they tried to work out a deal. However, it sounds like the two sides couldn’t come to terms, leading to this trade.

Many immediately started to wonder if Rodgers was regretting his extension or would blow a gasket upon finding out that his star playmaker was headed elsewhere.

For those wondering, yes Aaron Rodgers has signed his contract

Surprisingly, it was soon reported afterward that not only was Rodgers aware of the Adams situation before he signed his contract but he has been in the loop the whole time. Also, it sounds as though the issue was less about the Packers being unable to pay the wideout but that he simply wanted a fresh start as well as a chance to play with Fresno State teammate Derek Carr.

Per a source, the Packers we’re willing to pay Adams equally to what the Raiders are with this new deal but Adams preferred to play elsewhere.

Aaron Rodgers was aware of the developments with Adams as they unfolded in recent days.

While Aaron Rodgers was negotating his contract, he knew Davante Adams would never play for the #Packers again. The situation was too far gone. Something had to give. And when Adams informed GB he wasn’t playing on the tag, talks got fired up. Now, Adams will be on the #Raiders. https://t.co/YTAxHov0Rj

Source: The Packers were willing to pay Davante Adams as much or more than the Raiders are. It came down to him wanting out and to play with Derek Carr, his college QB.

Also per source, Aaron Rodgers knew this was coming and still signed his new Packers contract.

That seems to be at odds with everything Rodgers has said up until this point. Based on that, you’d assume that he’d just decide to start fresh with the Denver Broncos. However, if the truth is that Aaron always just wanted the biggest contract possible and didn’t ever intend to leave Wisconsin, then he got what he wanted. And the fact that he signed knowing that Adams was probably gone certainly gives that theory credence.

More to come on this story for sure, especially as we hear from Adams, Rodger, and their respective teams.