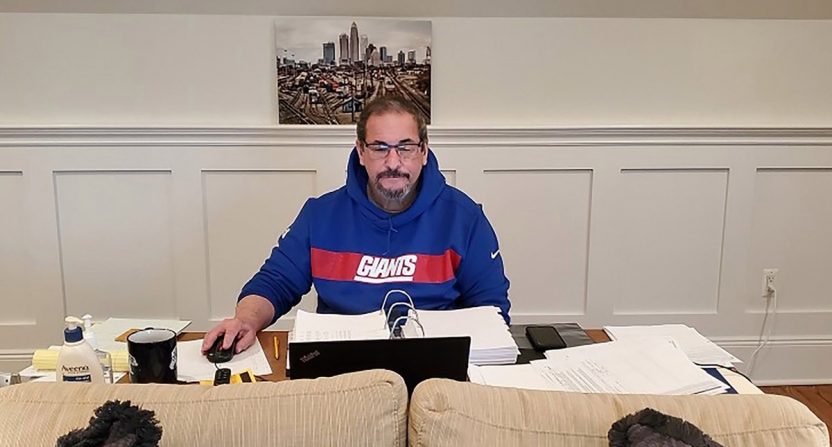 This week will be the most unique NFL Draft ever. With the COVID-19 pandemic, teams are doing this draft in their respective homes and adhering to various stay at home orders and social distancing recommendations.

This year’s draft is going to have a real fantasy football feel as the NFL Draft will be done virtually, complete with mock drafts. Reportedly, the mock draft had a rough start as GM’s failed to mute their microphones and there was a technical glitch so chances are this weekend’s draft is going to have some unintentional laughs and will require lots of patience from everyone.

Each GM has been preparing their draft setup. For some, like Denver’s John Elway, Minnesota’s Rick Spielman, San Francisco’s John Lynch, and LA Chargers Tom Telesco, it’s monitors upon monitors. For New York Giants GM Dave Gettleman, you could say it’s the latest in 2005 technology.

A part of me respects this. I never thought I could be an NFL GM and I am in no way comparing what I do in fantasy football with anything an actual GM has done but seeing Gettleman’s setup, it gives us fantasy players just a little bit of hope that we might be able to do what they can do. Or at the very least have a more elaborate setup than they do.

Many people however had their fun at Gettleman’s expense. This is going to be one entertaining event for a variety of reasons and Gettleman’s presence might be worth tuning in.

Dave Gettleman is gonna wind up auto drafting a player because his computer asked him to update his antivirus software. #NFLDraft #NFLDraft2020 pic.twitter.com/NUq7UT0A8u

Dave Gettleman really using the type of computers we got out of the computer carts in elementary school to draft our team this year. pic.twitter.com/kE5BZ54lO0

John Lynch: “I need immediate access to every bit of data we have at my fingertips.”

Dave Gettleman: “I’ll take a 2007 dell inspiron and a bottle of lotion.”

What are the odds Dave Gettleman goes beyond his 500 free hours on his AOL CD on Thursday?

This is going to be Dave Gettleman 😂 pic.twitter.com/pByShKjsOm

Rock on, Dave. If it works for you, it works. I’m sure it doesn’t inspire confidence in most Giants fans but if you only need one laptop, a binder, and a bottle of lotion, anything more would just be for show.