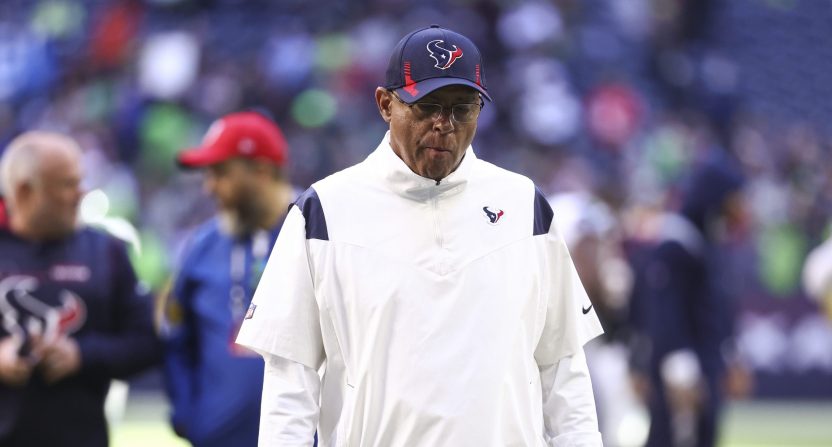 Black Monday came and went and while many NFL head coaches lost their jobs, it appeared that Houston Texans head coach David Culley was safe and would have the chance to start building on his first season.

That appearance was short-lived, however, as Ian Rapoport and Mike Garafolo are reporting that Culley has been fired, making him just the 17th “one and done” head coach in NFL history.

The #Texans are firing coach David Culley, per me and @MikeGarafolo.

Culley’s head coaching opportunity was the culmination of over 40 years of coaching, including 27 years as an NFL assistant. He took over a franchise in disarray, dealing with the fallout of the Bill O’Brien era and, soon after, the sexual assault allegations against star quarterback Deshaun Watson. Couple that with a pretty bare-bones roster and it’s not as though anyone was expecting too much from the Texans this season.

The Texans went 4-13 on the season but many people assumed it would be a tough year for the franchise as they begin to rebuild. However, it appears that Culley’s position was always tricky and he was effectively coaching for his job as soon as he got it.

When the Texans hired David Culley, they only guaranteed him two years of money; they knew there always was the real chance he would be one and done. As one league source texted about his one-year tenure, “I knew it when he was hired.”

Culley joins Urban Meyer as the two coaches to lose their jobs after one year, though he at least made it further than Meyer did and completed the season.

The reaction to the news from NFL circles on social media was shock and confusion, as many wondered what, exactly, Culley was realistically supposed to have done to ensure his job? Others also pointed out that it’s another instance of a black coach getting an extremely short window in which to prove himself, as was the case with Brian Flores in Miami as well.

There's no measure by which you can say Culley didn't overachieve this season.

This says what people were saying last offseason was true. It was an afterthought/stopgap hire. https://t.co/qHgVtdoFrL

What did David Culley not do that would have made the Texans a successful football team?

This is significantly more embarrassing for the Texans than it is for David Culley. https://t.co/lVtt9heAEt

David Culley was hired to be fired after one year. They knew the team would stink and they didn’t want to saddle someone like Josh McDaniels with 4-13. Culley did more with Davis Mills than any other coach did with a rookie QB this year.

They set that man up to take the hit this year then sent him packing regardless of how he did (and he did very well). Bad juju. https://t.co/T47BSlVZto

One black coach in the NFL….in 2022. Pathetic, embarrassing, and very on brand.

There were three Black coaches in the NFL this year. Two of them outperformed expectations with bad rosters and got fired.
This league doesn’t hire minority coaches and in the rare instances when teams do, they get less time and opportunity to succeed https://t.co/br5YYtC2hA

The NFL’s reputation for not making space for black head coaches is well-earned at this point. But even putting that aside, the way Culley was treated by the Texans ownership and executives, who already had a reputation for being pretty terrible, is as crass as it was predictable.