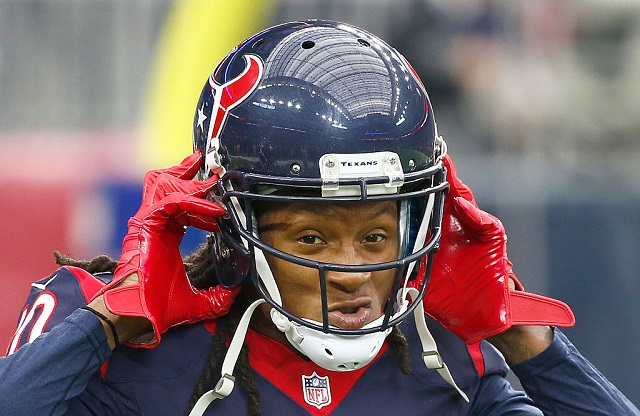 The holdout has long been a tool utilized by NFL players who don’t feel they are being fairly compensated for their contributions to their teams. Typically undertaken by players with contracts soon to expire, those working under restricted free agent tenders or, like Kansas City Chiefs safety Eric Berry, because they have been handed the franchise tag for the year rather than a long-term deal.

But sometimes, like we recently saw from Houston Texans wideout DeAndre Hopkins, they happen at moments not so advantageous for anyone but the franchise.

Hopkins, the Texans’ 2013 Round 1 draft pick, had a Pro Bowl season in 2015, with 111 catches on 192 targets for 1,521 yards and 11 touchdowns, still has two years (including this one) left on his rookie deal, with the Texans exercising Hopkins’ fifth-year option earlier in 2016. But no matter that: Hopkins walked out of the Texans’ training camp at the end of July when his demands for a contract extension were met with institutional silence.

Per me and @AdamSchefter, unhappy with his contract, Texans WR DeAndre Hopkins has left camp. Holdout underway. Texans aren't negotiating.

But that holdout was short-lived and should not have happened in the first place. For one, Hopkins has no leverage. The Texans own his rights through the 2017 season (where he’s set to make just shy of $8 million) and the team has no need to enter contract talks at this time. Though the Texans did say that negotiations could pick up with Hopkins’ return to camp, that wasn’t likely the motivating factor for Hopkins to break off his holdout after one day. It’s also the $40,000 in fines he incurred by leaving and the fact that had he not returned by Aug. 4, he would not receive his $445,005 contracted roster bonus.

Hopkins has since said that he “wasn’t trying to send a message” by walking out, though he did add that he “was doing what I felt was best for me and my family.” Meanwhile, Texans owner Bob McNair commented on the situation, saying, “We’ll deal with his contract at the proper time. We take care of our players and we’ll take care of him.” The key, of course, is the “proper time” that McNair mentioned. It could come quickly, as a sign of noting Hopkins’ frustration as well as his contributions to the Texans’ offense. But it could wait until 2018, as is the Texans’ right.

Much like their protracted counterparts, brief holdouts have historically yielded mixed results for the players who employ them as a potential negotiating tactic. Miami Dolphins safety Reshad Jones, also a Pro Bowler in 2015, held out of the first day of his team’s mandatory minicamp this spring (and voluntary OTAs before that) in search of a new deal. He reported without getting a contract hammered out. Last year, Dallas Cowboys defensive end Jeremy Mincey skipped out of the first three days of training camp and returned when he got what he wanted: a $500,000 salary increase that made up for a playing-time bonus he came up just shy of earning in 2014.

Now-retired cornerback Cortland Finnegan may or may not have left Tennessee Titans training camp in 2011 due to a contract dispute. He claimed it was a “personal matter” and said in a statement that, “It’s obvious media had no idea of why my absence took place.” Regardless, it did not result in new money and Finnegan joined the Rams a year later.

Indeed, the only time a brief holdout accomplished what it was meant to was back in 1988, when Philadelphia Eagles quarterback Randall Cunningham missed just one day of training camp and returned to sign three one-year contracts — the world of NFL money was far different — worth a total of $4 million in salaries and bonuses, thus making him the highest-paid Eagle in franchise history at the time.

All of these players’ situations were different, but one common thread runs among them: Unless you have leverage (a.k.a., are like Cunningham, the face of the franchise) or are not asking for much, like Mincey, teams have no reason to reward holdouts, particularly brief ones, with new contracts or contract extensions. Hopkins has every reason to believe that he’s worth more than he’s being paid — his stats certainly make a strong argument — but without any reason for the Texans to feel compelled to do so immediately, he simply will have to wait.

The DeAndre Hopkins touchdown train is full steam ahead and good luck trying to stop it. Not fair. #TENvsHOU
https://t.co/lF1N1asAQ7

For now, Hopkins is back at training camp and saying all the right things. Post-practice on Monday, he said, “I play football for a living. That’s my job, that’s what I love doing. I love coming out here and being with my teammates. I’ve just got to keep working. I know [the contract] will come. I’m not rushing it. I know it’ll happen one day.”

And he’s not wrong. If Hopkins keeps working and stays healthy and productive, there’s no reason to believe the Texans won’t give him a lucrative long-term deal in the relatively near future. But he learned quickly that it won’t be happening in the immediate term. All this would have accomplished is Hopkins incurring further fines and relinquishing his hard-fought-for roster bonus. Holdouts only benefit players who have something to gain — and nothing to lose.