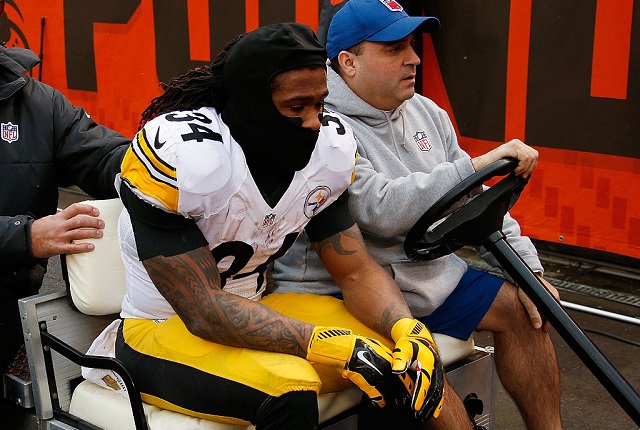 After serving as a formidable backup for Le’Veon Bell, who sustained a right ACL tear against the Bengals, D’Angelo Williams will miss the Steelers’ AFC Wild Card game against the same Bengals on Saturday with a foot injury (reported to be an ankle sprain).

The #Steelers consider RB DeAngelo Williams (foot) out vs. #Bengals, sources say. If they win, there's a chance he plays next week.

Williams’ effort since Bell’s injury has resulted in one of his best seasons in the NFL. After coming over from Carolina, Williams started 10 games this season for the Steelers and rushed for 907 yards, good for the third-best total in his career. That includes 76 yards rushing and two touchdowns on 20 carries in a 33-20 win over the Bengals in Week 14.

The 10-year veteran found the end zone 11 times on the ground, tied for first in the league. He also had one of the better receiving seasons of his career, with 40 receptions and 367 yards — both career-highs.

The Steelers obviously now have a big void to fill at running back, down to Fitzgerald Toussaint and Jordan Todman on the roster. Ben Roethlisberger will have to produce more in the passing game for Pittsburgh to advance.

Toussaint is in his second season in the league after spending last season in Baltimore, where he saw just six carries. He has 18 attempts this year with the Steelers and 42 total yards. Todman is in his fifth NFL season, his first with Pittsburgh. He has started three games in his NFL career, all with the Jaguars. He has four carries on the season for 22 yards.

If the Steelers are able to get by the Bengals, they will face Denver in the divisional round and Williams is expected to be healthy by then. But the road to Denver is much tougher without their two top veteran running backs.