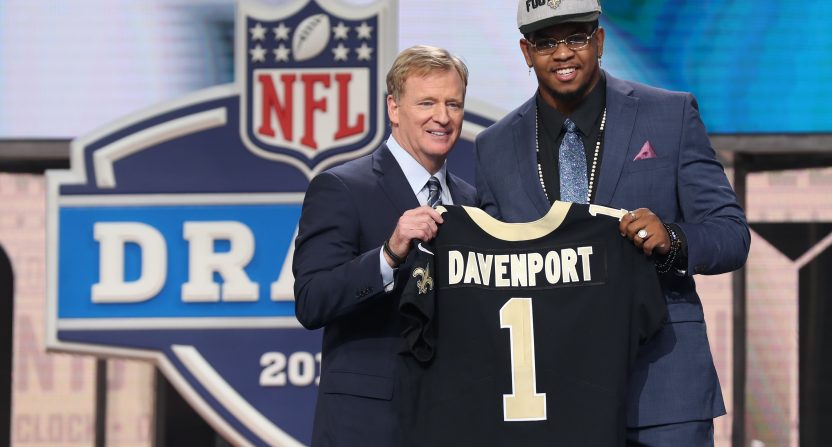 It’s silly to make significant judgment calls or hand out grades on the day after Round 1 of the NFL Draft. We can project and predict, but who knows if Baker Mayfield will be a bust or if Josh Rosen will be a future Hall of Famer. Or if any of the quarterbacks taken eventually fall somewhere in between.

But what we can observe and take into account is the various strategies of the teams, what positions they address through the draft, and how they position their franchises for the next season and beyond.

In that regard, the boldest and most interesting move of the draft didn’t involve a quarterback. Although most fans around the country probably assumed that would be the case.

When the New Orleans Saints traded up 13 picks from #27 to #14 with Louisville QB Lamar Jackson still on the board, conventional wisdom may have indicated that the Saints were finally pulling the trigger on finding a successor to Drew Brees. Playing behind Brees and under the tutelage of Sean Payton would seem to be a perfect fit for Jackson in making the transition to the NFL.

However, that was not to be the case. Instead of going for a quarterback of the future, the Saints went all-in to continue to push for a championship in the present. The Saints traded up to draft defensive end Marcus Davenport from UT-San Antonio, giving up their 2019 first-round pick to the Green Bay Packers in the process.

Continue to watch the NFL Draft on NFL Network/FOX/ESPN#SaintsDraft pic.twitter.com/ysUwFsVOt5

It’s a huge gamble for the Saints, who were already short on draft picks without a second-round pick this year, thanks to trading in the third round last year. That trade seemed to work out for New Orleans as they traded up to land Alvin Kamara, who went on to be named Offensive Rookie of the Year.

The Saints have been one of the most aggressive teams in the NFL over the years in the NFL Draft. In 2008, 2011, 2014, and 2018, the Saints have traded up in Round 1 to get a player they coveted. It’s a philosophy that certainly fits with Sean Payton as a head coach, who just happens to be the guy brave enough to pull off an onside kick in the Super Bowl. Trading up in the first round AND giving up another first-rounder in the process for a defensive end is the definition of a bold move.

It’s a ton of capital to give up to trade from 27 to 14. And it’s a decision that could have a make-or-break impact on the Saints franchise for next year and years to come.

Specifically, it’s clear that the Saints will continue to be Drew Brees’ team at least for the next two years. Barring an unforseen decline or major injury next season, Brees should quarterback this team into his 40s through the 2019 season. The future Hall of Famer agreed to a two-year, $50 million deal in March that will see him break pretty much every career passing record on the books in a Saints uniform.

In a time when everyone is sending up smokescreens and illusions, Sean Payton was telling the truth when he told Dan Patrick that he didn’t have any of this year’s class of top quarterbacks ranked as highly as the team did with Patrick Mahomes last year. Maybe this trade means the Saints have reservations about next year’s class as well.

By passing on a quarterback this year and giving up next year’s first rounder, it’s clear that the Saints won’t be picking an elite signal caller in the draft anytime soon. Perhaps Payton will pick a mid-to-late round prospect that he can attempt to groom for a couple years. But the franchise already tried that with Garrett Grayson in the third round in 2015 and he never saw the field in the regular season.

Brees has certainly showed no signs of slowing down the past few years. And with he and Tom Brady excelling this late in their careers and increasing rule changes that have protected quarterbacks more than ever before, there should be no reason why Brees shouldn’t be able to continue to play at a high level. But eventually, some day, who knows when, Payton and the Saints will have to find that successor. It’s just not going to be any time soon.

So what about now? It’s clear that with Brees the Saints are pushing all their chips into the middle to try to win a Super Bowl this year, according to best betting sites. The Saints were just one play away from the NFC Championship game before the Vikings’ miraculous game-winning touchdown as time expired in the Divisional Round. If there’s one glaring area the Saints still need help, even after seeing a stratospheric improvement in their defense last year, it’s a pass rush alongside All-Pro defensive end Cameron Jordan.

Last year, DE Alex Okafor and safety Vonn Bell had 4.5 sacks to tie for second behind Jordan. The last Saints outside rusher to get more than five sacks in a season other than Jordan was Junior Galette in 2014. If Davenport can contribute next year in rushing the passer and put up seven to 10 sacks, it’s scary to think how good this young defense can actually be. In fact, even if he has half the rookie season that Marshon Lattimore had last year in winning Defensive Rookie of the Year, the Saints could finally have a defense that matches the quality of their offense.

And that’s what this trade is all about. The Saints already have all the makings of a Super Bowl contender next season. They had what could be one of the best drafts in NFL history last year with Lattimore, Marcus WIlliams (in spite of his missed tackle against Minnesota), Ryan Ramczyk, and Alvin Kamara. If this trade works out for the Saints, Davenport can be the piece that helps them get over the next hurdle and get even closer to another championship.

But if Davenport fails to contribute, and the Saints are behind the 8-ball when it comes to finding their next quarterback, it could set the franchise back years.

With no second-round pick and next year’s first-rounder already gone by the wayside, Davenport will need to step in right away and help the Saints win now. That’s a kind of pressure in Round 1 of the NFL Draft that’s usually reserved for the quarterbacks.