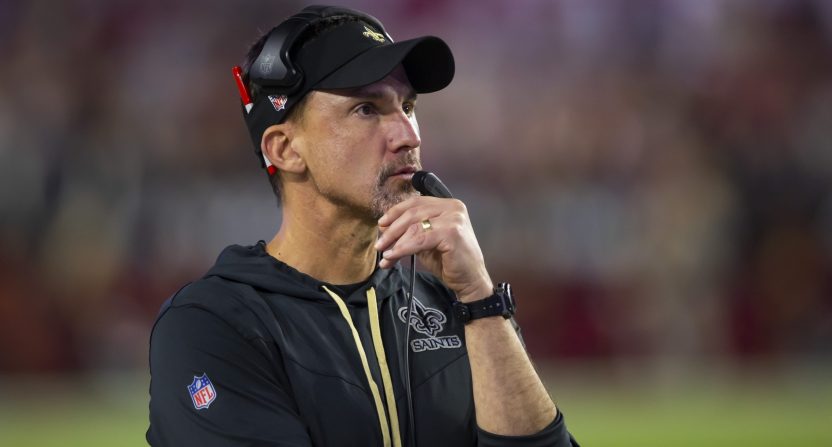 Despite leading 16-3 late in the fourth quarter, the New Orleans Saints were defeated 17-16 by the Tampa Bay Buccaneers on Monday. Tom Brady threw a pair of touchdowns to win the game. He had help from Dennis Allen, head coach of the Saints.

After Tampa scored to make the game 16-10, the Saints got the ball back with exactly three minutes left. The first play of the ensuing drive was an Alvin Kamara run that went three yards. That prompted the Buccaneers to use their first time-out. So, far, so good. Then, things went immediately haywire for Allen.

On second down, Andy Dalton dropped back to pass. He was sacked. The positive for the Saints is that Tampa had to use its second time out. Unfortunately for New Orleans, it was also a 10-yard loss. And from that point on, what Allen did for the rest of the game make Jeff Saturday’s abysmal clock management at the end of Week 12’s Monday Night Football Game look not only competent, but downright brilliant.

Rather than try a run or even a screen pass on third down, the Saints went deep. And while Andy Dalton made a fantastic pass to Taysom Hill, the Buccaneers broke it up. Had the Saints done something to keep the clock moving, Tampa would have had to two one of two things. One, take its third and final time out. Two, save the time out and let the clock run. But in all likelihood, the clock would have gone to under two minutes remaining with the ensuing punt, essentially nullifying the two-minute warning.

Instead, the Buccaneers got the ball on their own 37-yard line with 2:39 left and a time out. Stunningly, the clock management only got worse.

Even surrendering a touchdown and PAT, the Saints should have had a chance to win. They would have only been down by a point and with good clock management and could have left themselves plenty of time to drive down and kick the winning field goal. What happened, though was the exact opposite of good clock management.

New Orleans took its first time out after Brady and Julio Jones connected for 15 yards to bring the Buccaneers to the five-yard line. Even that came several seconds after the play, with only 19 seconds remaining. At this point, the Saints were only winning the game if they kept the Buccaneers out of the end zone. And with three seconds remaining, Brady and Rachaad White connected on a six-yard touchdown pass.

The ensuing PAT put the Buccaneers ahead. New Orleans had only enough time for a lateral play, which predictably didn’t come close to succeeding.

A potential drawback of a defense using a time out in this situation is usually that it gives the offense more time. But time wasn’t an issue for Tampa. The Buccaneers had plenty of time to start the drive and quickly moved the ball into New Orleans territory.

Additionally, the Saints had less-than-ideal defensive personnel on the field. An earlier time out could have not only helped preserve time but also given them a chance to get the right players out there. Instead, they let the clock run and fell behind with no time to respond. New Orleans could not have handled this any worse.

Allen was ripped for his poor handling of the game.

Dennis Allen should be calling timeouts. Clock is not a factor for the Bucs. This is terrible.

They aren’t going to do it, but this game is all the impetus the Saints should need to dismiss Dennis Allen and admit they screwed up that hiring.

I just can't emphasize enough how much of this game falls on the coaching staff. I get the dropped passes. Really, I do. But this on Dennis Allen and his staff. 1,000%

Why are coaches so bad at this

With the way the Saints have coached this game and made some of their decisions all year, you’d think they were tanking for a draft pick.

But they don’t have their pick. It’s just that they’re coached by Dennis Allen.

I am 100% positive that’s the dumbest and most indefensible NFL loss all season.

Brady is the greatest to ever do it. Blowing a 16-3 lead late in the fourth quarter is frustrating but against him, it’s not unforgivable. The problem here is that Allen and the Saints seemed to make it as easy for Brady and the Bucs are they possibly could. Losing to Brady is one thing. Rolling out the red carpet for him is quite another.