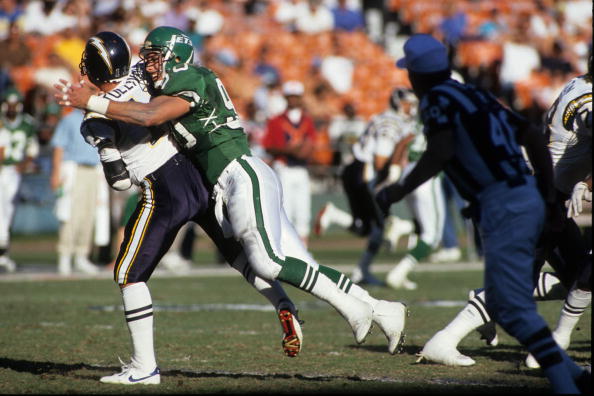 The loss of a life is always tragic and terrible, no matter how you slice it. But the case of Dennis Byrd seems like a particularly grave injustice, as he had overcome so much adversity only to have his life lost in a car accident.

Byrd suffered a serious neck injury while playing for the New York Jets in 1992, and that sparked fears he would never be able to again use his legs. He bounced back, learned to walk again, became a motivational speaker and a CBS analyst, and inspired many, even having his number retired by the Jets. However, he passed away at age 50 Saturday after a car veered into his lane and struck him.

As Byrd’s friends and family begin to heal, they have begun remembering the defensive end, and the stories and thoughts coming out about him are remarkable. Emily Kaplan wrote a piece about Byrd’s life and legacy for the MMQB, and the amount of people who decided to participate was almost endless. Everyone had a story about how genuinely great he was, but there were also some about the struggles he dealt with.

Pete Carroll, who was Byrd’s defensive coordinator shortly after he came into the league, and helped Byrd record 13 sacks from the three-technique defensive tackle position in their first year together, had some heart-wrenching comments about Byrd and what he knew about dealing with paralysis.

“I know he struggled, he never got over the fact of what he lost. And even though he came back so far, it wasn’t enough for him. He wanted to get back to playing. He wanted to get back to the game he loved—and the players, and the team and all that he had expected to be part of his life. It was really hard on him. I know he had some really tough, dark times trying to make it through it.”

As Kaplan writes, Byrd’s life was far from easy even after he was able to walk again:

For the rest of his life, Byrd walked deliberately, having to think about every movement in order to make it happen, an exhausting practice akin to trudging through a snow drift. He suffered from Brown-Séquard syndrome, in which the hemispheres of his body were affected differently by the spinal cord injury, leaving the left side of his body with less sensation and the right side with less motor control. Later in life he used a cane. Large motor functions, such as throwing a football, were no longer possible. Instead he picked up the hobby of clay sculpting, which he mastered using his fine motor skills. (Friends vouch for his creations as Frederic Remington quality.) Ten years after the collision he told the Tulsa World that he’d regained only 20 percent of the strength and muscle capacity that he’d had on his 6’5″, 240-pound body. Because of the trauma he suffered, even that strength waned with age. Several years ago Byrd considered having a device surgically implanted to alleviate the pain in his back and neck with electrical impulses, but didn’t go through with it. He rarely talked about his daily pain; when friends would press him, he’d simply say it was “indescribable.”

Brutal. Byrd never gave up, though, and he was an absolute dynamo. However, he didn’t always want the spotlight, and agent Rick Schaeffer told Kaplan Byrd’s initial celebrity became tough for him later on.

“If there was a negative in everything we did, it was that the legend of Dennis Byrd became too big for a human being to live up to.”

Still, there were plenty of positive memories too. Byrd’s former teammate Marvin Washington wanted people to remember just how good he was as a player.

“I don’t want people to forget that he was an absolute ass-kicker on the field.”

Byrd also proved to be a tremendous motivational speaker, as Rex Ryan described to Kaplan about his 2011 speech to the Jets before their playoff game against the Patriots:

“You could hear a pin drop,” Ryan says. “This was a guy who was paralyzed on the football field, and to hear him say that he loved the game of football so much that he would give anything to play one more game—you just knew he was telling the truth. And he wanted to play for our team. Not just any team. Our team. We all carried that with us.”

Byrd was indeed a legend and someone many wanted to emulate. As his memory lives on, Byrd’s story also becomes all the more impactful in today’s player-safety heavy landscape. He advocated for so much and asked for so little. Let’s hope Byrd’s name lives on.