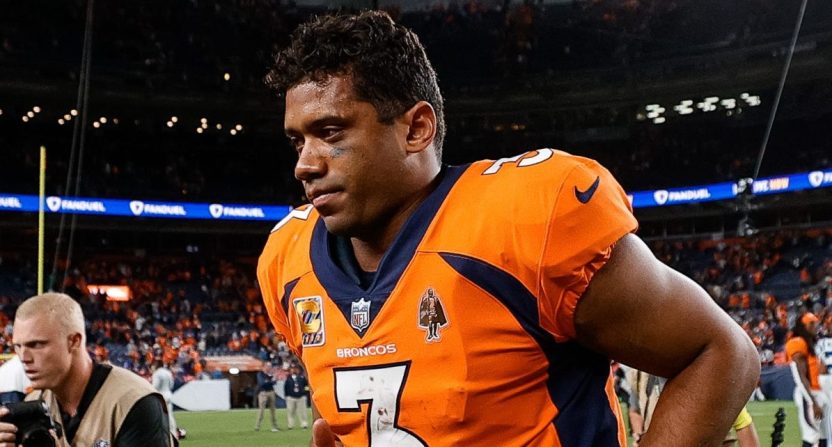 That’s the explanation that no one seemed to have considered as the veteran Denver Broncos quarterback struggled this year. Yet ESPN’s Adam Schefter reported Saturday that Wilson played all of Denver’s loss to the Indianapolis Colts Thursday, and three-quarters of the Week 4 loss to the Las Vegas Raiders, with a partially torn lat in his right (throwing) shoulder.

Broncos’ QB Russell Wilson played Thursday night against the Colts, and three quarters of the previous game against the Raiders, while battling a partially torn lat near his right shoulder, according to sources.https://t.co/HBBoet8LX5

Wilson reportedly hurt his shoulder early in the second quarter of the Raiders game, but doctors did not diagnose it until Wednesday.

According to Schefter, Wilson will not need surgery, but the injury could “linger for multiple weeks.” He reportedly received an injection in his shoulder Friday.

Wilson is expected to play in the Broncos’ next game Oct. 17 against the Los Angeles Chargers on Monday Night Football.

This may explain some of Wilson’s struggles. Some observers have said he looks prematurely old at 33. Wilson has been the subject of jokes. His own teammate, K.J. Hamler, even showed him up after Wilson didn’t see him wide open on the decisive play in Thursday’s loss to the Colts.

This injury report might change the narrative. Or maybe not. NFL fans reacted to the injury news with a shrug, saying the veteran’s problems seem to go much deeper.

Ironically, his best game was against the Raiders. He looked average (SEA) to hideous (HOU, SF) in the other two.

To me, the shoulder might now be a problem, but it clearly isn’t the only one https://t.co/PeJFQWjNCP

He looked like doodoo in the games before this one too! https://t.co/fcUPUTiGIP

In 5 games, Russell Wilson has completed just 59.4% of his passes and has an 82.8 passer rating, both of which are career lows. https://t.co/vhC7aFY9rc

Might help explain some of those eephus passes he was throwing. Couldn’t get any zip.
No confidence without zip.

Where’s the lat even located? https://t.co/jqPWtzfJYY