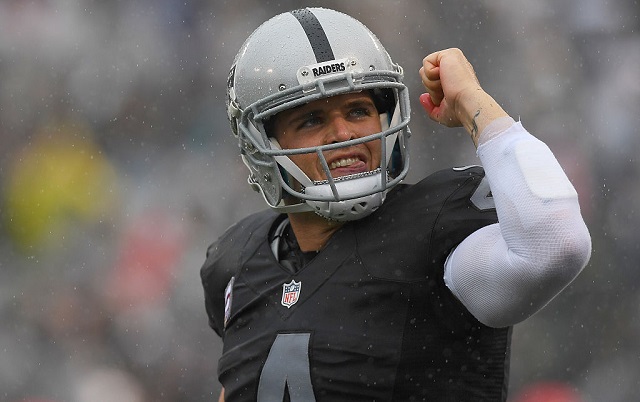 After 13 seasons without a playoff berth, the once-hapless Oakland Raiders appear to be on the road to the postseason at long last. The Silver and Black are currently under a revival thanks to young quarterback Derek Carr, who in his third season is the undisputed best young quarterback in football.

During his first two seasons in the NFL, only Dan Marino had more passing touchdowns than Carr. He has found greater success this season after another offseason of hard work to continue honing his skills. The former Fresno State star who threw for 50 touchdowns and 5,000-plus yards in his final college season is now a gunslinger on Sundays for the Raiders, who seem to win every week due to some dramatics from their quarterback.

With a handful of fourth-quarter comebacks already under his belt, Carr saved perhaps his best performance of the season for the Tampa Bay Buccaneers in a wild overtime win for the Raiders. Carr tied the game with a last-minute drive and set up Sebastian Janikowski for a game-winning field goal at the end of regulation before he was forced to finish the job in overtime after a 50-yard miss from his kicker.

Carr would recover from another Janikowski miss in overtime to throw a touchdown on 4th-and-4 with just over a minute left to give the Raiders a walkoff win in Tampa Bay. The game-winner, a 41-yard pass to Seth Roberts down the middle of the field, would also give Carr the Raiders’ record for passing yards in a single game with 513, providing another reminder of the 25-year-old’s elite talent.

The Raiders’ overtime victory was their fifth straight road win to start the season and their second consecutive win in Florida on a road trip where the team wisely stayed in-state through the week to avoid West-to-East travel woes. At 6-2 and tied with the Denver Broncos atop the AFC West, Carr has quietly built himself a solid MVP case through the first half of the season.

Before further talk about Carr’s MVP credentials, credit needs to go where it is due. FS1’s Colin Cowherd has driven this discussion long before anyone else, but it shouldn’t just be Cowherd on the bandwagon after Sunday’s game.

Carr currently sits in the top tier of all major statistical categories and has also passed the eye test on almost every occasion this season with his game-winning drives. The Raiders quarterback is tied with Detroit’s Matthew Stafford for the most game-winning drives of any quarterback since 2015, which sets Carr apart from the rest of the players in the MVP discussion at the halfway point.

While Matt Ryan leads the NFL in yardage and touchdowns, Carr has the momentum of a worst-to-first narrative along with his clutch play to drive home his MVP candidacy. With one of the worst statistical defenses in the league, one could easily argue that the Raiders wouldn’t be 6-2 through the midway point if not for Carr’s clutch play and voters will consider those game-winning drives on the road when they determine the MVP at the end of the season.

But Carr’s statistics also make a strong case, as he is fifth in passing yards with 2,321 and third in touchdowns with 17. Those numbers also come with a mature decision-making process for a third-year player, demonstrated by Carr throwing just three interceptions. His improved ball protection has allowed for one of the NFL’s most impressive road winning streaks in recent memory and plenty of newfound optimism for a Raiders franchise that has had little positive attention from the national media since their 2002 AFC Championship.

The MVP resume of Carr will be put to the test on Sunday Night Football in Week 9 with the Raiders headed back to the Coliseum to host the Denver Broncos in a battle for first place in the AFC West. A national primetime audience will have its eyes on Carr and the Raiders in a game against the Super Bowl champs that has plenty at stake for both teams.

For the Raiders, their first Sunday Night Football appearance since 2006 is a chance for the franchise to let the world know they are real contenders in the AFC. With an opportunity to prove they are legit, Carr could start to pull away from the MVP pack if he can keep up his high level of play against the league’s best defense. For now, few in football are as good as Carr and after half of the season, he deserves praise as one of the NFL’s top talents.