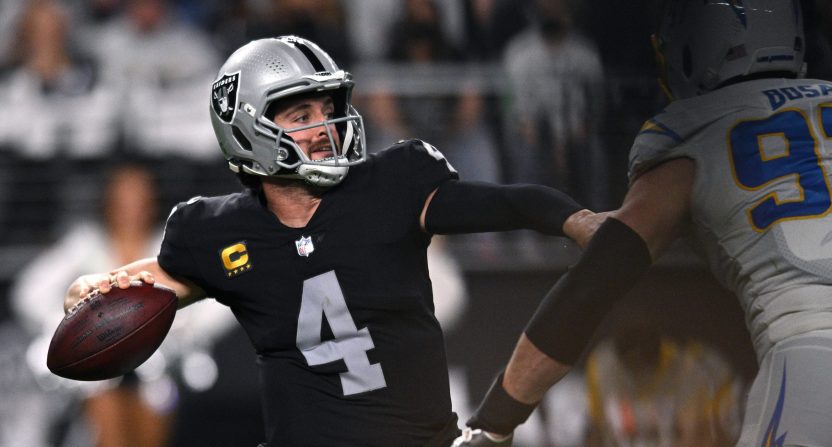 The Las Vegas Raiders finished 10-7 and made the NFL playoffs (thanks to a wild final game of the season), which is saying something given all the issues that could have derailed the franchise early on in the 2021-2022 season.

A big part of the reason the Raiders were able to pull it all together was quarterback Derek Carr. The eight-year veteran put up a career-best 4,804 passing yards along with 23 touchdowns and a 68.4% completion percentage. In his first-ever playoff game this season, Carr threw for 310 yards and a touchdown, but also lost a fumble and threw a game-losing interception.

While the Raiders might feel like continuing to build around Carr is the right thing to do, they might also see this as the ideal chance to sell high on the veteran. There are plenty of franchises around the league that would kill for a solid starter like him and, apparently, they’re reaching out to kick the tires on a potential trade.

FYI: As teams continue to look for QB’s, multiple teams have expressed interest in @Raiders QB Derek Carr. Not a surprise at all, it’s that time of year. Expect the interest to continue to heat up as long as Carr’s contract situation remains as is.

Carr is under contract through next season, so that could be part of the reason that the Raiders might consider trading him in order to get some long-term value out of him rather than losing him outright after 2022-2023. There is perhaps a ceiling on how far Carr can ever take you, so perhaps the Raiders could see this as a time to get a lot for him and then build around someone potentially better.

At the moment there doesn’t seem to be any indication that Las Vegas is looking to move Carr, but plenty of NFL folks had something to say about the possibility.

Of course they should. Derek Carr was the reason the Raiders made the playoffs last season. If I'm Kevin Colbert, Martin Mayhew, or Jason Licht, I would have already had trade proposals ready for Dave Ziegler to see. #Raiders #Steelers #Commanders #Buccaneers https://t.co/lp5c0gach1

Most disrespected QB in the league. Had a super incredible season last year and showed TRUE leadership.

PLEASE let someone trade for Carr so the Raiders can trade up for Willis. https://t.co/FziQPK2jzD

Rumors of a potential Derek Carr trade seem to pop up every offseason but if there was ever a time it was going to happen, this is it.