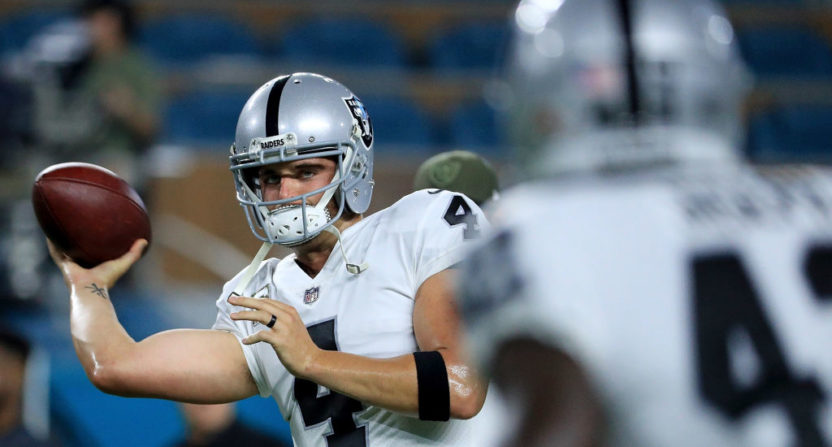 Raiders quarterback Derek Carr has found himself in the middle of a controversy that he says was completely fabricated.

Miko Grimes, the wife of Buccaneers cornerback Brent Grimes, appeared on an internet show Tuesday morning and claimed the Raiders offensive line wanted to protest during the national anthem, that Carr objected to the idea of a protest, and that Oakland’s line responded by letting the Redskins’ defense injure him in Week 3.

There were already a number of red flags in Grimes’ allegations. First, she said the injury occurred in a Monday night game against Washington. Carr was actually injured in a Week 4 matchup against Denver, which was a Sunday afternoon game. (If you check the YouTube comments on the video of Carr’s injury, you can see Grimes isn’t the first person to come up with this conspiracy.)

Grimes later clarified she didn’t know if what she’d said was the truth. It’s just a theory she believes.

https://t.co/0P0RZHDqhR Listen to this if u wanna know the truth! I didnt break this story OR say it was true. Do i believe it? YES!

Raiders lineman Donald Penn and other teammates already came to Carr’s defense on Twitter after the video of Grimes went viral. On Wednesday, Carr addressed the situation, first debunking that a Bible verse tweet had anything to do with Grimes’ claim, then calling her allegation “false.”

“I know you have to ask. That has nothing to do with what was said,” Carr told the inquiring reporter. “I don’t give false claims any due. If you see anything (on my Twitter timeline), you see I post a lot of scriptures. You can ask anyone about the YouVersion Bible app; that was the scripture of the day and I just posted it.”

“Everyone started saying ‘shade,’ this and all that. I’m bigger than that,” Carr said. “I don’t pay any mind to that kind of stuff because it detours. Making false claims about somebody before you know them, and about a group of guys, that has no business in our world. We’re trying to promote peace and love. I don’t think that has any place.”

There’s no reason to believe Carr and his teammates are covering anything up. ESPN’s Diana Russini took her own look at the story and found it was “completely false.”

Told by several Raiders sources this claim is entirely false. "This couldn't be further from the truth" Here's how it was explained…

Raiders didn't know what to do. I'm told "Derek Carr never told his team to stand, sit, or kneel. He told them I respect your choice"

I also got a text from a Raiders offensive player "please don't ask me for a response to dumb stories. Derek is our guy" #Raiders

Thank you, Miko Grimes, for wasting our time. Though it did liven up the week.