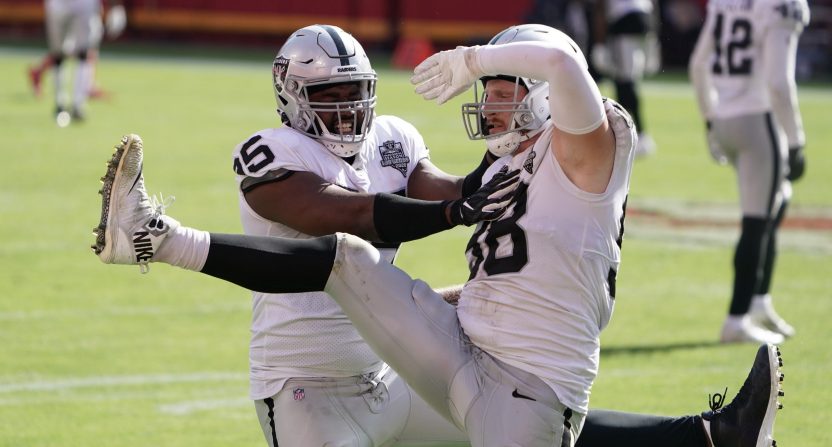 The Kansas City Chiefs came into their home game on Sunday against their rival, the Las Vegas Raiders, riding a 13-game winning streak they’ve been riding since before winning the Super Bowl. That streak and their undefeated record in 2020 came to an end after the Raiders thoroughly outplayed the defending champs in a 40-24 road win.

Things started out as you might have expected for the Chiefs, who were favored to win the game by 10+ points.  They cruised to a 14-3 lead behind rushing touchdowns by Patrick Mahomes and Tyreek Hill.

However, Derek Carr was not to be denied on this day. The Raiders QB threw the first of three touchdowns on the day in the second quarter, hitting Nelson Agholor on a beautiful 59-yard score between two defenders.

Following a Mahomes touchdown pass that extended KC’s lead to 21-10, Carr connected on two more touchdown passes, a five-yard dump to Darren Waller and then a 72-yard scamper by rookie Henry Ruggs III that put the Raiders up 24-21.

YOU CANNOT KEEP UP WITH HENRY RUGGS.

The Raiders must have been thrilled to take a 24-24 score into the locker room, especially as Mahomes started doing some very Mahomes-like things with the football.

In the third quarter, both offenses cooled off and it looked like it was just going to be a matter of time before the Chiefs started pulling away. However, it was the Raiders who rattled off some scores first, in the form of a two Josh Jacobs rushing TDs and a 43-yard field goal by Daniel Carson to go up 40-24 in the 4th quarter. That second touchdown was set up in large part by this Jeff Heath interception, the first of the season for Patrick Mahomes.

The Raiders with the interception (almost a pick-six) on Patrick Mahomes, before scoring another touchdown that is likely the dagger. Stunner in Kansas City. pic.twitter.com/gCTtuIaySE

The Chiefs, being the Chiefs, kept hope alive with a Travis Kelce touchdown and converted a two-point conversion, putting them back in striking distance down 40-32.

The @Chiefs aren't done yet. #ChiefsKingdom

However, the Raiders did just enough to keep their offense alive and run down the clock, icing the game and ending KC’s winning streak. The Chiefs drop to 4-1, the Raiders improve the 3-2, and the AFC West situation just got a little more interesting.

Now let's build on it. pic.twitter.com/pYhR9Y3MH8