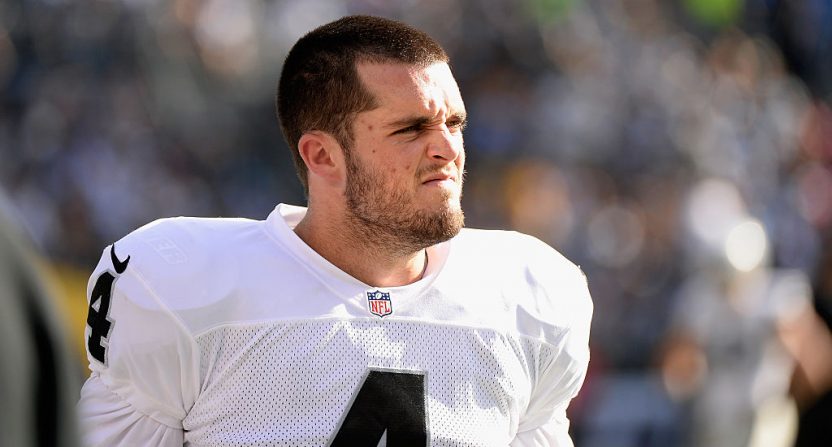 Derek Carr’s comments from Monday won’t endear him to a large sect of Raiders fans. Reflecting on the franchise’s upcoming relocation from Oakland to Las Vegas, the star quarterback said he thinks fans who won’t continue rooting for the franchise after the move are not “true Raiders fans.”

From The Mercury News:

“We’re not going to split up like you’ve seen other cities do,” Carr said. “We’re not going to do things like that. For the ones that do, I don’t really believe that they are true Raider fans. I feel their hurt. I’m with you. I hurt too. But at the same, we’re all in this together and we’re just going to do it together.”

“Out of 1,000 people, you’re going to get one or two that have something to say. And that’s with everything. It doesn’t matter if you throw four touchdowns or three picks, you’re going to get it both ways. I expect that, but if something happens, it’ll be the 1 percent. Hopefully ya’ll don’t focus on that kind of stuff because there’s the 99 percent that are loyal, faithful fans that are going to ride with us wherever we’re at.”

Can you really blame “true” fans for switching allegiances when their team switches cities? If an Oaklander wants to root for the Las Vegas Raiders, that’s great. But if they are furious that the franchise left them, their diehard fandom from years past shouldn’t be discounted. And that’s exactly what Carr is doing.

While it’s not Carr’s decision, the Raiders will move to Las Vegas by 2020. After months of speculation, the NFL voted nearly unanimously in favor of the move in March. If anything, the franchise did not stay true to its fans, who stuck with the team through years and years of atrocious football.

And that’s why you can understand why some longtime Raiders fans are especially upset considering the timing. For the first time in a long time, the Raiders are actually a relevant NFL team. They went 12-4 last season, making the playoffs for the first time since 2002, and could have been even better had Carr not broke his leg in Week 16.

So while Oaklanders can still enjoy at least one more season of contending in the AFC West, soon enough it won’t matter.

Although the Raiders had been a joke of a franchise for over a decade before last season, they have a deeper history in Oakland including two Super Bowl victories. John Madden, who won the 1976 Super Bowl in Oakland and made five other AFC Championship games, has already voiced his concern that the legacy could get wiped out.

There’s nothing wrong with staying true to the city instead of the franchise.