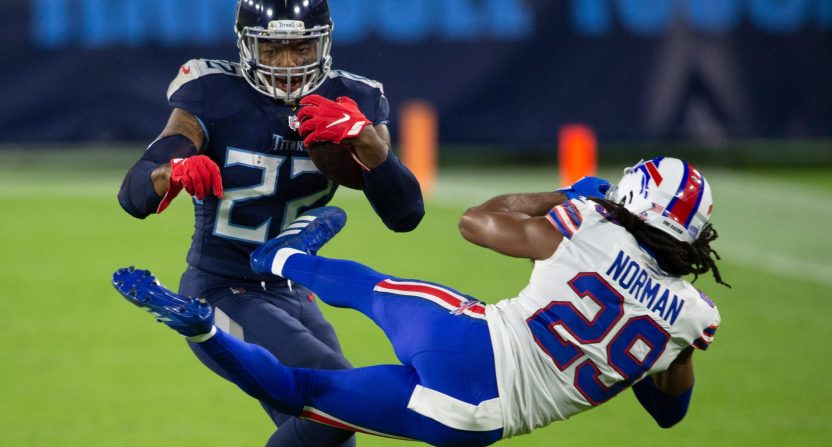 The Tennessee Titans are one of the most unassuming No. 1 seed in NFL Playoff recent memory, in large part because they have been playing without star running back Derrick Henry since the end of October.

That’s over now because the Titans announced on Friday that The King has returned and Henry will play against the Cincinnati Bengals on Saturday.

The @KingHenry_2 Experience is BACK 👑 pic.twitter.com/1OWT0vNdmT

The news isn’t much of a surprise as Henry made his return to practice a few weeks back with the expectation that he would be ready to play once the Titans started the playoffs following their bye week.

Henry, who Barry Sanders recently cited as one of the top running backs in the game, garnered 937 yards and 11 total touchdowns in eight games before the injury that’s put him out until now. The Titans were able to maintain their status as one of the top teams in the AFC while Henry was out, but his return means that the most dominant running back in the league will add another dimension to Tennessee’s offensive attack, making them that much harder to overcome, especially with home-field advantage.

Henry led the NFL in rushing yards and rushing touchdowns in 2019, doing so again in 2020 by becoming just the eighth player in NFL history to rush for over 2,000 yards in a season. He was named the 2020 Associated Press NFL Offensive Player of the Year and was named to the Pro Bowl. There’s a reason the New York Times profiled him today via those who tried in vain to tackle him when he was in high school.

It goes without saying but NFL folks were extremely excited to discuss King Henry’s return to the football field.

Derrick Henry to the Bengals defense on Saturday pic.twitter.com/UQAHFsB4VH

What we've all been waiting for: the Titans activated Derrick Henry, the team announced. It's official.

Good luck to the Bengals on Saturday. The last thing in the world anyone wants to face is an extremely motivated Derrick Henry.