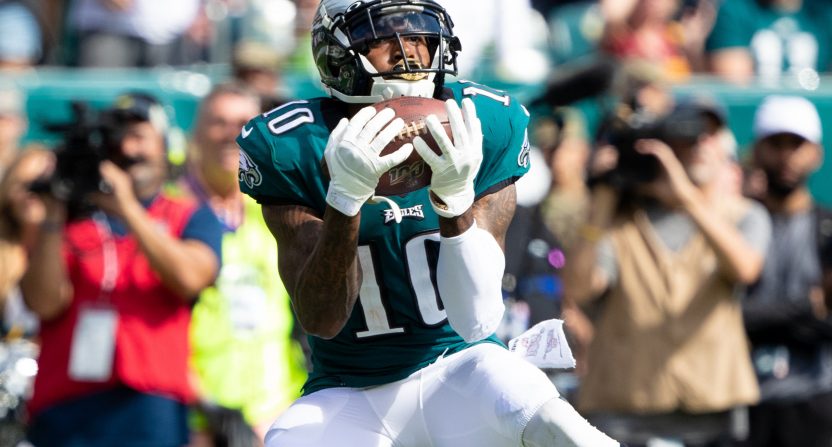 Unless you’re saying he’s a completely horrible person, talking about Adolf Hitler is usually a bad idea. If you’re in a debate or you’re trying to make your opinion known and the idea of Hitler comes up in your mind, it’s best to either come up with a different talking point or not say anything at all.

Philadelphia Eagles wide receiver DeSean Jackson apparently didn’t get that memo when he posted anti-Semitic passages that he thought were attributed to the nazi dictator. Looking past the fact that he incorrectly attributed the quotes to Hitler, Jackson thought it was and it was still anti-Semitic no matter who actually said that.

Jackson apologized on Instagram and as a result, the Eagles posted their own statement stating that it was important for Jackson to not only apologize but also use his platform to unite and not divide, especially when Jewish people have also been targets of racism and discrimination for a long time.

I post a lot of things that are sent to me. I do not have hatred towards anyone. I really didn’t realize what this passage was saying. Hitler has caused terrible pain to Jewish people like the pain African-Americans have suffered. We should be together fighting anti-Semitism and racism. This was a mistake to post this and I truly apologize for posting it and sorry for any hurt I have caused.

Many are going to look at past instances and compare the outcomes of them to what should be done here but the focus should be on Jackson and not only what he said, but why he said it, and what he plans to do now to fix his ignorance. DeSean Jackson isn’t the first pro athlete to post something racist and sadly, he won’t be the last. He will need to put in the work to undo his ignorance, understand why what he posted was horrible, and that views like that cannot be accepted in public and in private for him and for those around him. That should ultimately dictate the next step.