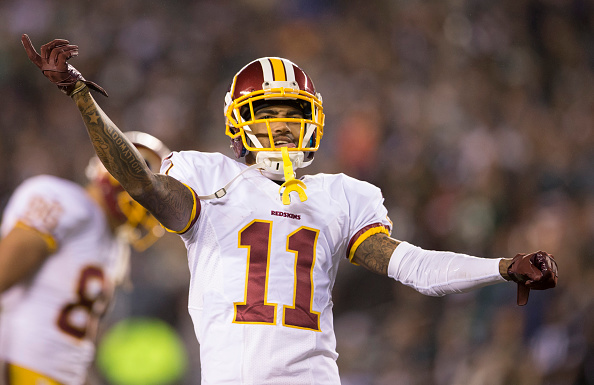 Philadelphia fans famously once booed Santa Claus, so no one should be surprised what they’re capable of. Nevertheless DeSean Jackson was taken aback at the hostility he received from the Eagles faithful when the Redskins played in Philly on Sunday.

From The Washington Times:

“In between the lines and out, I put in a lot of hard work, a lot of success and had the city behind me,” Jackson said after the win, regarding his playing time with the Eagles.

“It’s disturbing to come back and get the boos from the crowd and the fans because it’s not my decision to leave. [Coach] Chip Kelly released me. Knowing what I did for the city, in the community and things like that, I put my heart into it. That part is frustrating, but it doesn’t get any better than coming in here and winning and putting them out. That guy over there, he was the coach. He made the decision, but I’m happy to be where I’m at, and we’re having a lot of success over here.”

Jackson does have a point. He was the Eagles’ best receiver for years, catching 356 passes for 6,117 yards and 32 touchdowns in six seasons in Philadelphia. Sure, he once dropped the ball before the end zone in one of the silliest plays in NFL history, but he also did stuff like this:

And of course, Jackson is fair to point out he didn’t leave the Eagles by choice. He was cut in 2014 by coach/GM Chip Kelly, after which someone in the organization leaked that Jackson had “gang ties,” which seemed (and still seems) like an unfair and arguably racist justification for releasing a player.

On Sunday, Jackson’s Redskins beat Kelly’s Eagles 38-14 to clinch the NFC East title, with the receiver contributing four catches for 40 yards. But according to The Washington Times, the receiver couldn’t fully revel in the victory.

Just about everybody was eager to participate in the celebration — everybody except wide receiver DeSean Jackson. It wasn’t that Jackson wasn’t thrilled his team just clinched the NFC East title or that he didn’t want to celebrate. He was exhausted from the emotional rollercoaster that was playing against his former team for the division title.

“I think DeSean Jackson was the only one [asleep]. He was tanked in his chair,” Gruden said. “His emotions, I think, got the best of him. Everybody else was pretty much celebrating, but we had a good time.”

Jackson, who missed two months with a hamstring injury, has 30 receptions for 528 yards and four touchdowns in nine games this season for the Redskins.