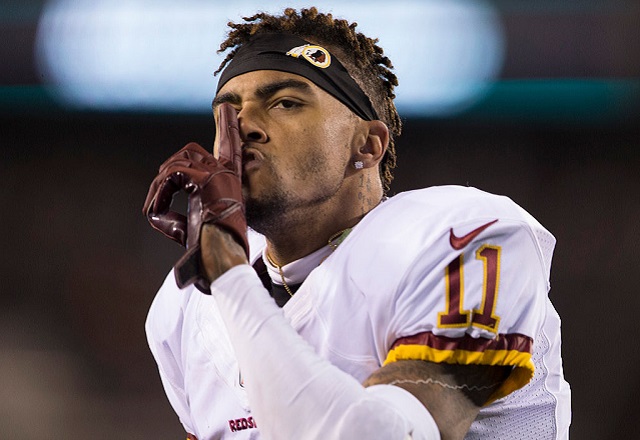 Washington Redskins wide receiver DeSean Jackson is not known to be one who holds anything back when asked for his opinion.

Time and time again during his NFL career, Jackson has mouthed off on and off the field. But more often than not, he has a way of backing up his words with his performance on the field. This is why it was so shocking when the Philadelphia Eagles decided to cut ties with Jackson out of the blue between the 2013 and 2014 seasons. Jackson became the first of many high-profile yet questionable personnel moves by Kelly in Philadelphia, with LeSean McCoy being moved to Buffalo the next offseason.

Jackson and Kelly were hardly best friends, and with Kelly now out of a job in Philadelphia it was only a matter of time before somebody got the former Eagles wide receiver on the record about his thoughts about his former coach’s firing.

“I’m a firm believer that bad karma comes back on you,” Jackson said in a one-on-one interview with Robert Klemko for Monday Morning Quarterback. “When you ruin a team like that, you do things to peoples’ families, you release people, you trade people, you get rid of good players who build something with the community, with the fans, with the kids—to have a guy come in and change up the team like that, I just believe in karma.”

How I picture DeSean Jackson as he gave those Chip Kelly quotes to @theMMQB: https://t.co/nZrJ9q6kkP https://t.co/c8dJpncfbp

Kelly won 20 games in his first two regular seasons in Philadelphia, largely with players assembled by his predecessor and current Kansas City Chiefs head coach Andy Reid. It didn’t take long for the Eagles to give Kelly more power over roster management, and his questionable decision-making with personnel resulted in a seven-win team in 2015 and two straight seasons without a postseason appearance despite playing in the dreadful NFC East. Despite their past dealings, Jackson was not ready to go on full attack mode on his former head coach.

“I don’t have any bad words to say about him as far as what he feels he needs on his roster,” Jackson continued. “But the guys that were on that roster created something special, from Jeremy Maclin to LeSean McCoy to Trent Cole to Todd Herremans and myself and Brandon Boykin; it goes on and on and on. When we were there, we were a brotherhood. So for everyone to go their separate ways and to see how it all ended up, it’s a very sad thing.”

Kelly’s dismantling of the team and diminished results, along with the emerging tales of how he handled practices and players off the field is why the coach is now looking for a new job elsewhere. His first taste of the NFL had some good moments, but it also suggested he has much to learn with how the NFL works beyond the X’s and O’s if he is going to thrive at this level.