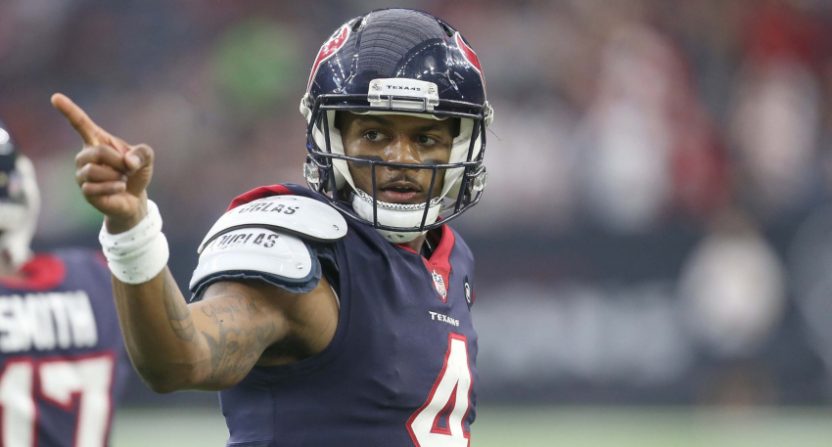 Deshaun Watson apparently wasn’t impressed enough by the Houston Texans’ new head coach to back off his desire to play for a different NFL team. According to ESPN’s Adam Schefter, the quarterback officially requested a trade.

Deshaun Watson officially has requested a trade from the Houston Texans, per league sources. He actually did it weeks ago. Their new head-coaching hire, David Culley, has not and will not alter Watson’s thinking.

Watson asked for a trade weeks ago, but the request is apparently going public after the Texans hired David Culley as their new coach. Culley, 65, has been the Baltimore Ravens’ assistant head coach, passing game coordinator, and wide receivers coach for the past two seasons.

Bieniemy not being among the Texans’ initial candidates to be interviewed reportedly upset Watson, who wanted team management to consider the Chiefs’ OC in addition to San Francisco 49ers’ defensive coordinator Robert Saleh, who eventually took the New York Jets’ head-coaching job.

Related: Get ready for the wildest NFL QB carousel we’ve ever seen

But hiring Nick Caserio from the New England Patriots organization to be Houston’s general manager without consulting Watson was apparently the breaking point for the quarterback. The hard feelings can be traced back to the Texans’ trading top receiver DeAndre Hopkins without informing Watson of the deal.

Watson’s fourth NFL season was the best of his career, throwing for 4,823 yards, 33 touchdowns, and seven interceptions while completing 70 percent (382-of-544) of his passes and averaging 8.9 yards per attempt.

What’s next for Watson and the Texans? The four-year contract extension he signed last fall includes a no-trade clause, which allows him to control where he might be dealt. But Houston may not want to trade its franchise quarterback either and could keep him for the length of his contract in addition to franchise-tagging him for three seasons, which would keep him in a Texans uniform through the 2028 season.

Watson could attempt to force the issue by not reporting to minicamps and training camp, but that could get expensive for him. The team could fine him roughly $96,000 for skipping minicamp and $50,000 per day for each day of training camp he misses. Missing preseason games could cost him $620,000 per game. And if Watson decided he didn’t want to play football anymore if it meant playing for the Texans, he could lose $21.6 million.

The Texans likely wouldn’t want the distraction of a disgruntled Watson hanging over preparations for the 2021 season, so a trade is probably in the team’s best interests. Yet with Watson only 25 years old and under contract for another five years (at $186 million), Houston is in a position to ask for a major return in any potential trade. The amount of top draft picks that Watson would surely cost might turn off some teams, if not make a deal impossible.

According to rumors, Watson prefers to be traded to the New York Jets or Miami Dolphins. Plenty of other teams will likely show interest, however. For instance, the Carolina Panthers bringing Watson back to the Southeast, where he starred at Clemson and won the 2016 national championship, would be an enormously popular move.

But the San Francisco 49ers, Washington Football Team, New England Patriots, and Denver Broncos are each looking for a new quarterback. Add the Detroit Lions to that list if they trade Matthew Stafford, as expected. (But will Watson want to play for a rebuilding team?) The Green Bay Packers could be in the mix too, if Aaron Rodgers wants to move on. Really, Watson could be an upgrade for nearly every NFL team.

This has now officially become the story of the NFL offseason. It might dominate the chatter during the off-week before the Super Bowl and will certainly attract most rumors and headlines after the big game is played. The question is whether or not the Texans can persuade Watson to back off his trade demand or if the quarterback is serious about getting out of Houston.